Oil and US power behind the lies

The greatest myth is that right up to the start of the war Bush and Blair were open to a peaceful settlement. Clare Short says that Bush and Blair agreed to go to war against Iraq last September. But the basic plan was in place for years. In 1998, 18 prominent conservatives wrote a letter to President Clinton urging him to ‘aim at the removal of Saddam Hussein’s regime from power’.

Most of the signatories are now in the Bush administration, including Donald Rumsfeld, Paul Wolfowitz, Richard Perle, Elliott Abrams, Richard Armitage, John Bolton, Paula Dobriansky and Zalmay Khalilzad. Many had come together in a group called the Project for the New American Century.

They seized enthusiastically upon the deaths on 11 September 2001 as a chance to launch a war – whoever was responsible for the attacks and even though they had nothing to do with Iraq. Blair went along with that project, playing the crucial role of Bush’s loyal ally while 90 percent of the world was against him. These are the real issues that nobody should forget.

The vote was six to four, and delegates from the Amicus and GPMU unions voted in favour, upholding the suspension of the anti-war MP. George Galloway now faces a kangaroo court procedure originally set up by former Labour leader Neil Kinnock to expel socialists and left wingers from the party. US determined to use force

The BBC was biased – FOR Blair’s war

TONY BLAIR and Alastair Campbell are furious because the BBC is not biased enough in their favour. Yet a study released last week showed that the BBC was the most ‘pro-war’ of all the broadcasters, deserving its nickname then as the Blair Broadcasting Corporation.

The BBC was even more pro-war than Rupert Murdoch’s Sky News. The study looked at peak time news broadcasts during the war. It found that the BBC relied more than any other station on government and military sources for its stories. Academics at Cardiff University conducted the study that found that the BBC placed least emphasis on Iraqi casualties.

Just 23 percent of the BBC stories about Iraq featured casualties whereas 40 percent of Channel 4 news stories referred to them. The report also found that the BBC was the least likely to report the unhappiness of Iraqi people over the US and British invasion.

The BBC was also less likely than Sky, ITV and Channel 4 to quote independent sources on what was happening, such as the Red Cross. Deputy head of the journalism school at Cardiff, Justin Lewis, told the Guardian:

‘Far from revealing an anti-war BBC, our findings tend to give credence to those who criticised the BBC for being too sympathetic to the government’s pro-war stance.’

Who pays for the lies?

THE ARGUMENTS about the war this week have been presented by much of the media as a debate about parliamentary protocol. But these decisions mattered because they resulted in thousands of deaths in Iraq. Bush and Blair’s lies meant Kadem Hashem lost 12 members of his family when US bombs slammed into his house.

British and US occupation has brought division and death, not democracy, to Iraq. Children are dying in Iraqi hospitals because their treatment has been cut off. A doctor told the Observer this week, ‘Many people will die. We do not have the proper drugs, nor do we have the electricity, water, sanitation, or oxygen supply.’

FEROZ Abbasi and Moazzam Begg face being murdered on the orders of George W Bush. These two young men have been held for months without trial at the notorious US prison camp at Guantanamo Bay. Both are British citizens. Feroz Abbasi comes from Croydon and Moazzam Begg from Birmingham.

They have been brutally interrogated by US secret agents. They have never been allowed to see a defence lawyer. Now they, and four other men, are to be put on trial for their lives before a US military tribunal. The trial will take place behind closed doors. The men will be represented by US military officials.

Even pro-war politicians in Britain are fearful that such a blatant breach of human rights laws will further undermine support for Bush’s war. Foreign office minister Lady Symons said there would be ‘very vigorous discussions’ with the US about securing a fair trial.

Feroz Abbasi is just 23 years old. Moazzam Begg is 35 and has four young children. His father, Azmat, says his son is a ‘proper family man’, who ‘was never involved in Al Qaida’. ‘All that we ask for is proper justice and human rights.’

The two men have been subjected to secret interrogations in Guantanamo Bay, where they are outside the protection of legislation that applies on the US mainland.

The Pentagon claim the men may have links to Al Qaida. But British government officials have admitted that any information obtained in the prison camp would be inadmissible in UK courts because no defence lawyers were present.

It’s not just in Guantanamo Bay that US interrogation methods are arousing the anger of human rights groups.

Amnesty International is raising serious concerns about US army treatment of the hundreds of Iraqis they have picked up and interned. There are reports of prisoners being kept handcuffed, blindfolded, naked, deprived of sleep and forced to listen to loud US rock music.

US plans in danger as Iraq deal falls apart 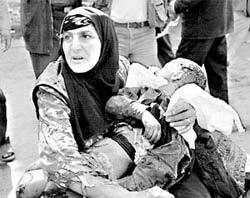