The media and police claimed a gang of Asians assaulted Walter. They claimed the Asians were trying to enforce “no-go” areas for whites. The police argued that the main problem in Oldham is not racism against black and Asian people but racist attacks by Asians on whites. A senior detective told the Manchester Evening News that the Asian gang shouted, “Get out of our area,” at Walter before the attack.

The paper printed these words in huge letters on its front page beside a picture of a battered Walter Chamberlain. But the police interviewed Walter after the attack. At no point did he say that he was told to get out of the area. Yet the police said they “believed” this was a racist attack, and allowed that spin to be put on the story in the media. Walter’s family insists that the attack was not racist.

“It was a violent attack on an elderly man,” said Steven Chamberlain, Walter’s son. “As a family we don’t think it was a race issue at all.” The family’s statement was barely reported in the media. TGWU union leader Bill Morris was absolutely right last week to accuse the police of attempting to discredit the Macpherson report into the murder of Stephen Lawrence.

The Macpherson report forces the police to take racist motivation into account if the victim believes racism to be a part of the crime. The police in Oldham are trying to undermine Macpherson by saying all crimes committed by Asians against white people are racist.

This is a lie. Asian people in Oldham have suffered years of systematic discrimination from the council and the police. But when they fight back against the racists the police categorise it as “racist”.

The Nazis are now trying to make political capital out of the racism of the press, politicians and the police. The British National Party is to stand in two seats in Oldham in the coming general election.

The National Front (NF) is trying to march through Oldham this Saturday. Local anti-racists have organised quickly to stop the Nazis. The Anti Nazi League (ANL) held a successful stall in Oldham town centre last Saturday.

“We got a really great response from the mainly white people who were in town,” says Mark, an ANL member. “People were queueing up to get our leaflets and stickers which attacked the Nazis for trying to make gains out of this horrific attack on Walter. Loads of people signed the open letter calling for Superintendent Dick Crawshaw to be sacked. It was so successful we ran out of leaflets in 40 minutes.”

This unity of ordinary black, white and Asian people was in sharp contrast to the behaviour of the Oldham police on Saturday. The police knew in advance that a gang of racist Stoke City football fans were planning to come to Oldham.

But they allowed them to march through Asian streets. A gang of racist Stoke fans, some of them NF members, marched through the mainly Asian areas of Coldhurst and Westwood. “The NF shouted, ‘NF is around,’ and, ‘Pakis out’,” says Nanu, a local resident and community activist. They smashed windows and kicked the shutters of the shops. All the young children and women were frightened. Why did the police allow them to come through our streets?”

Around 200 Bangladeshi and Pakistani people came out to defend their community. They formed a human line to stop the Nazis marching back through their area after the football match. At the end of the game the police escorted the racist fans to the railway station. The police then attacked the Asian people. They rammed vehicles into the human line, batoning people and setting police dogs on them.

Black, white and Asian anti-racists are refusing to be beaten off the streets. They are organising a rally against the NF’s plans to march in Oldham this Saturday. “As a family we don’t think it was a race issue at all.” 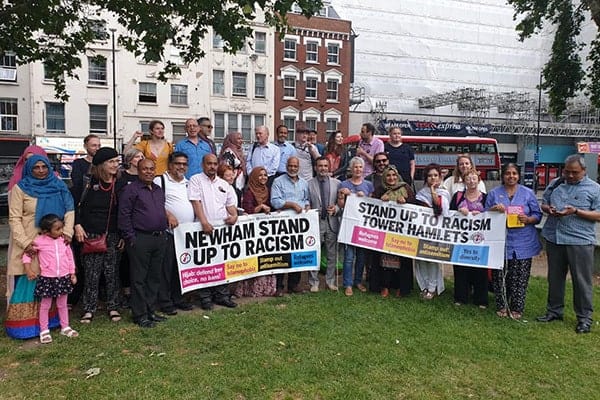 Is this the peace you promised, Tony B-liar? 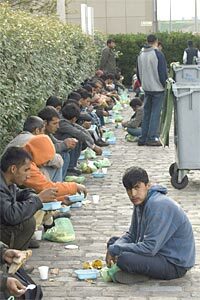