This article is over 15 years, 3 months old
Against a backdrop of school closures and threats of academies, it was a fantastic day for NUT teachers’ union members in Oldham on Thursday of last week as teachers at two secondary schools went on strike together.
Downloading PDF. Please wait...
Saturday 14 October 2006

Against a backdrop of school closures and threats of academies, it was a fantastic day for NUT teachers’ union members in Oldham on Thursday of last week as teachers at two secondary schools went on strike together.

This was against pay cuts imposed by the schools’ governing bodies due to government changes to pay scales.

South Chadderton became the fifth Oldham school to strike over this issue, while at Counthill 22 out of 26 strikers were on the gates when we walked out for the second time.

Picket lines swelled to over 30 as we were joined by supporters, former teachers and Unison union members who refused to cross our picket lines.

There was a mood of confidence and defiance evident on the gates over the pay cuts which in some cases are over £3,000 and were described by Elaine from South Chadderton as like a “kick in the teeth”.

One teacher at Counthill had only been at the school for three weeks when the first strike took place.

He said he was a bit unsure at first as a new teacher. However he added that he thought it was important to show support for those teachers losing money, as the same could happen to him.

NUT members organised collections for our Unison colleagues who respected the picket lines.

Both schools are on the local authority’s hit list. It wants to close three secondary schools, with some merging and others turned into academies.

Some 35 members of the NASUWT union at Pontllanfraith comprehensive, in Caerphilly, struck on Thursday of last week. Some teachers are losing up to £1,500 a year under the new pay structure.The union is warning of a rolling programme of further strikes starting next week. 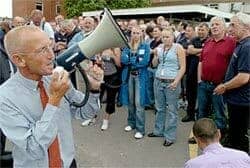 On track for new strikes