This article is over 9 years, 10 months old
Transport workers in London are still fighting for payments to cover the extra work they will face over the Olympics period.
Downloading PDF. Please wait...
Tuesday 13 March 2012

Transport workers in London are still fighting for payments to cover the extra work they will face over the Olympics period.

Bus companies have refused to meet with the Unite union to discuss the issue. Unite is calling for payments of £500 for each of its 28,000 bus workers in the capital.

He added that bus companies seemed “inclined towards confrontation” over it.

Meanwhile London Underground has offered a package of up to £850 to Unite members after talks at Acas. The union describes this as an offer that members “can seriously consider”. It will decide on it this week.

London Underground has yet to settle Olympics payments with the RMT union, which declared a dispute over the issue last month.

RMT is balloting all its Transport for London staff for strikes over a ban on staff leave during the Olympics period.

The union is balloting its members at privatised maintenance firm Tube Lines. Workers there are demanding equal pension and travel pass rights with other tube workers. 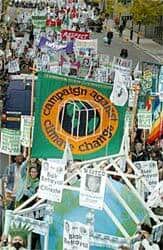