On the streets to stop the Tories’ assault

This article is over 11 years, 7 months old
Thousands of people have protested against cuts over the past week. They include:
Downloading PDF. Please wait...
Tuesday 02 November 2010

More than 400 people protested in Leicester on an anti-cuts demo organised by Leicestershire Against the Cuts last Saturday.

The Leicester and District trades council backed the action, along with the Unison, PCS and NUT unions.

Some 150 people marched through Brixton, south London, to “Save our Services” last Saturday.

Over 100 people demonstrated at Rest Bay, Porthcawl, on the south Wales coast last Sunday against cuts to search and rescue cover.

Bridgend Labour MP Madeleine Moon was at the protest.

Around 100 people gathered in Hastings last Saturday to pledge resistance to cuts and privatisation.

Speakers from the trades council, CWU and PCS unions and Labour councillor Jeremy Birch spoke at the rally.

Over 200 people demonstrated outside a meeting of Somerset County Council’s cabinet on Monday.

£35 million is set to be slashed from the road repairs budget.

The council took the very unusual step of using private premises and hired security for this meeting.

On Friday of last week workers dressed as skeletons protested at council headquarters.

The action was part of the Unison union’s campaign to persuade the government to “say no to skeleton services, say yes to a fairer way”.

The clinic first opened in 1932 and has served generations of families. People who use the clinic joined the protest along with local trade unionists and Right to Work campaigners.

Hundreds of local residents have signed a petition opposing the threat to close the clinic.

The need for an ongoing campaign including industrial action was raised by speakers. Portsmouth Trades Council is holding a public meeting on 18 November to form a coalition against the cuts. After the march there was an occupation of the local Vodafone shop in protest at the company’s £6 billion legal tax dodge.

Thanks to everyone who sent reports. 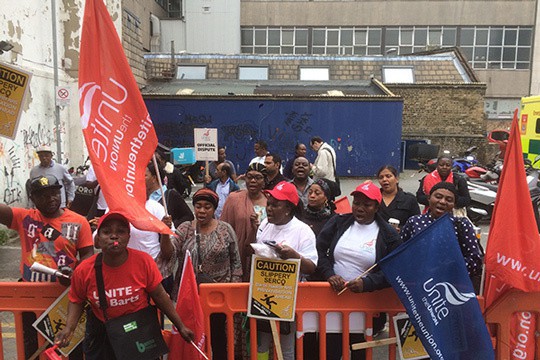 Tube workers' battle can boost resistance to the recession