His announcements on pay in the autumn statement were an effort to undermine the unity of the unions.

Union leaders have spent much of the latter half of this year talking about the fight over pay on the horizon.

But in a classic divide and rule tactic, Osborne made sure to do something different to each group of workers. Teachers face a harsh attack, threatened with the introduction of performance-related pay.

But the threat of regional pay in the NHS (see below) and civil service has gone on the back burner. However, Osborne does ominously say that there “should be greater use of existing flexibilities”.

The chancellor claims the pay review bodies just decided not to go for it. But in truth this is another U-turn for this weak government.

Meanwhile for most public sector workers the pay freeze finally ended—only for Osborne to grant a miserable 1 percent “pay rise”.

As Unison general secretary Dave Prentis said, “A 1 percent increase on the heels of a three year freeze that has cut pay in real terms by 15 percent is another blow for hard working public service workers and their families.”

The fact that the Tories are not simply slashing all public sector workers’ pay shows that they were worried by the prospect of a united pay revolt in the spring. But they have done nothing but replace the pay freeze with a pay cap.

As the government brings in a 1 percent cap on benefit rises too, there is potential to unite employed and unemployed workers to fight back.

It is clear that the Tories will take any chance they can get to attack national pay agreements. There is a risk that they will try to pick off groups of workers one by one. The teachers are first in the firing line. It is not just an attack on them but on us all.

The end of the threat of regional pay is a step forward for the unions—but a 1 percent rise is a sop that workers can’t afford to settle for.

Civil service union PCS is first up, with a fresh ballot over pay planned in the new year. The union says its executive will meet again in January to decide the timing of the ballot.

If teachers and civil service workers fight together, and other unions come in behind them, then the Tories will have a real fight on their hands.

The mass pay revolt promised for the spring must still go ahead. United strikes can force the Tories to pay up—and widen the cracks in the faltering coalition.

George Osborne has given up on regional pay in the health service—for now. But he still wants most NHS workers to take pay cuts.

Chrissie Gardner, a nurse and Unite union rep, welcomed the climbdown. She said, “This is a great victory for pressure from below but we absolutely protest and condemn the idea of regional pay for teachers.”

However, the south west pay cartel of health employers is still intact. This can only help bring about more privatisation.

“Unite members in health need to sign up to the union’s pledge that we’re not prepared to have worse terms and conditions,” Chrissie added. “We need to say we are prepared to strike.”

The government is still trying to divide health workers. The Department of Health suggests pay could be raised in some areas. This would be paid for by holding down other health workers’ pay.

Trade unionists held a lobby outside a TUC general council meeting in London on Tuesday of this week. They called on the TUC to call a general strike to defend workers against the Tory assault.

A teacher from Connaught School for Girls in east London, which is fighting plans to transform it into an academy, addressed the crowd. He said the teachers’ strikes had shown that people do want to fight. 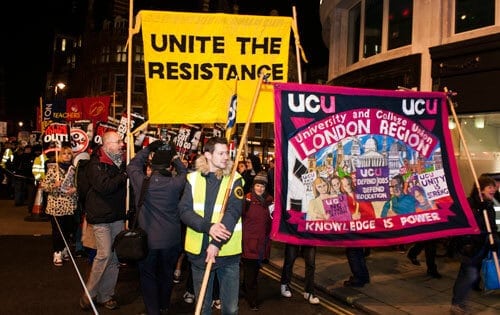