Our enemy is capitalism

This article is over 22 years, 5 months old
THE US city of Seattle was deeply divided on Tuesday. Police with armed personnel carriers waded into peaceful protesters. It was the first use of teargas and rubber bullets in Seattle since the Vietnam War. Even Glenys Kinnock was shocked at the police violence. She talked of the 'extraordinary over-reaction of the police'.
By Charlie Kimber writes from Seattle
Downloading PDF. Please wait...
Saturday 04 December 1999

THE US city of Seattle was deeply divided on Tuesday. Police with armed personnel carriers waded into peaceful protesters. It was the first use of teargas and rubber bullets in Seattle since the Vietnam War. Even Glenys Kinnock was shocked at the police violence. She talked of the ‘extraordinary over-reaction of the police’.

The police were defending wealth and corporate power. Around 6,000 delegates from 134 countries, plus assorted fixers and dealers, were at the World Trade Organisation (WTO) summit. In the streets surrounding it tens of thousands of protesters formed up to march against this symbol of capitalism. This demonstration included young and old, black and white, students and workers, socialists and Greens.

There were people from every state in the US and from every continent. It was great to see union contingents lining up alongside campaigning groups. Over 40,000 workers made up one feeder march.

Diane Lively, a student from Alabama, had travelled thousands of miles to be here. ‘I just want to tell the WTO to get their hands off our planet,’ she told Socialist Worker. ‘I want people before profits.’

Mike Ellison is a Seattle health worker and union shop steward: ‘The WTO is about corporations brushing us aside and seizing everything. Its rules mean poverty in Africa, Asia and Latin America, and in the US as well.’

SEATTLE WAS in ferment in the four days leading up to Tuesday’s march. Protesters packed a series of meetings and rallies. On Saturday over 2,500 people came to a teach-in on ‘Globalisation, the WTO and the Alternatives’. At 6.30 in the morning there were 150 of us queuing hoping to get returned tickets. Only four of us got in.

Inside the meeting thousands listened intently to 40 speakers over a period of ten hours without a break. The loudest applause was for speakers who tore into capitalism and called for a total rejection of the WTO’s priorities. Hassan Adebayo Sunmonu from the Organisation of African Trade Union Unity was cheered when he said, ‘Let’s tell the WTO that it is labour which creates wealth.’

Anuradha Mittal from Food First said that 800 million are malnourished across the world. Food is used as a method of blackmail by the US government. Let’s not forget Iraq or Cuba when they talk about free trade,’ she said. Tetteh Hormeku from Ghana asked, ‘How can there be a ‘level playing field’ between the US and, say, Burkina Faso in Africa? There, 86 percent of the population depends on agriculture, but there are fewer than 200 tractors in the whole country and 87 percent of the agricultural population are illiterate.’

The biggest cheers were for farmers’ leader José Bové from France. He explained how his group has fought symbols of US capitalism like McDonald’s, ‘But we are not against American workers. We are against the free market ideology wherever it comes from.’

‘MY ALLIES are working people, people who have the courage to stand up against this atrocious system.’

Actor DANNY GLOVER at a meeting against the WTO in Seattle

‘THE WTO should encourage us. They’ve made a revolution and it shows we can too. We should fight this idea that the economy and the environment are separate.’

THE MAIN trend at the meetings in Seattle was firmly anti-capitalist. At one point at Saturday’s meeting hundreds of students started chanting, ‘We are the future!’ with fists raised. ‘This feels like the 1960s,’ said one speaker.

The next day thousands of people went to similar forums. On Monday thousands took part in a Jubilee 2000 anti-debt human chain around the opening reception for the WTO. Every day here in Seattle there is intense discussion, long meetings, energy, enthusiasm and determination to win change.

MORE THAN 10,000 people demonstrated through Paris last Saturday against the WTO. Some 100,000 people joined over 60 similar protests across the country the same day. The target of the protesters was clear. ‘A global system which is all about profits for a few,’ was how Franca, a student on the Paris protest, summed it up.

School students and pensioners marched together, as did trade unionists and environmental campaigners. Along the route placards, chants and slogans combined fury at what capitalism was doing to the world and its people with a call to resistance and revolt.

Judith, a school student, explained, ‘It’s a bosses’ dictatorship and our liberty is under threat. It shouldn’t be the minority who control the majority.’ School students chanted, ‘Against the WTO, resistance! Against the bosses, resistance!’

PROTESTS AGAINST the WTO and international capitalism took place right across the world on Tuesday. Apart from the US and France, there were anti-WTO protests in India, Brazil, Canada, Australia, Pakistan, Holland, Argentina, Columbia, Bolivia, Bangladesh and others.

Protests took a whole number of forms. In Italy for example, activities such as teach-ins, film screenings, pickets outside banks and mass leafletings were planned in 59 different cities and towns. In the run up to Seattle there were protests in Stockholm, Brussels and Geneva – where protesters occupied the WTO headquarters.

AS WELL as London there were a series of protests across Britain.

Glasgow: Students from Glasgow University occupied the boardroom of Clydesdale Bank for one and a half hours.

Sheffield: 70 protesters blockaded a road in the city centre for half an hour before protesting outside Barclays Bank.

Leeds:150 protesters met in the city centre and held a lively protest.

Liverpool: Protesters met at the Victoria Monument and marched through the centre of town before rallying outside the local community college.

Manchester: Around 60 people protested outside Lloyds Bank on King Street. They forced the bank to close before blocking the road in a sit down protest.

Birmingham: Around 100 people met outside the city’s stock exchange before marching down New Street. 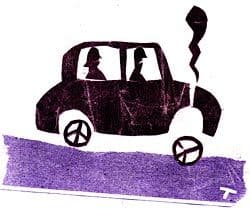 New challenges for US movement against war