This article is over 11 years, 7 months old
Unison members working across the Hesley Group of schools in Doncaster have voted by 96 percent for industrial action, and by 84 percent for a strike.
Downloading PDF. Please wait...
Thursday 06 January 2011

Unison members working across the Hesley Group of schools in Doncaster have voted by 96 percent for industrial action, and by 84 percent for a strike.

The Hesley Group is the biggest private sector care provider for people with severe learning difficulties across Doncaster.

“It is a brilliant result,” Jim Board, branch secretary of Doncaster Unison, told Socialist Worker. “It gives you a sense of the scale of the anger at the cuts.”

Workers are fighting against attacks on their terms and conditions—including reductions in sick and maternity pay—and for union recognition.

“Despite Unison representing 42 percent of workers in the group, no trade union is recognised by management,” Jim told Socialist Worker. “This makes the ballot result even more significant—workers are not prepared to be treated this way any longer.”

Doncaster Unison is about to initiate a consultative ballot for all members working across the local authority over the cuts and the impact on jobs, terms and conditions. 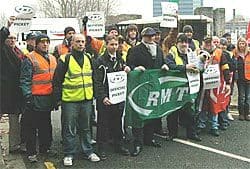