This article is over 17 years, 1 months old
The family of Robin Goodenough, who died in police custody in September last year, are celebrating the news that three police officers are to be prosecuted for manslaughter and assault following his death.
Downloading PDF. Please wait...
Saturday 04 December 2004

The family of Robin Goodenough, who died in police custody in September last year, are celebrating the news that three police officers are to be prosecuted for manslaughter and assault following his death.

Robin, 26, was pulled over by police in Oxford on 27 September 2003 while driving his sister’s car. Minutes later he stopped breathing and was taken to hospital, where he was pronounced dead.

After an investigation by Hampshire police the Crown Prosecution Service announced that three police officers – Robin Shane, John Shatford and Paul Summerville – will be charged.

Tom Goodenough, Robin’s older brother, told Socialist Worker, “It was a big shock. This never happens, does it? People spend years and years trying to get anywhere in cases like this.”

Tom believes the fact that Robin died in public in a relatively affluent area of Oxford has forced a proper investigation: “There were too many people who saw what happened.”

“It has involved a lot of campaigning,” he adds. “I have dedicated my life to this. I gave up work and spent a whole year asking question after question.”

The three officers will appear at Bow Street magistrates court on 13 December. Tom plans to be present with the family. “It will be the first time we’ve looked at the police officers’ faces,” he says.

Decisions to prosecute police officers for deaths in custody are rare, and the Goodenough family still face an uphill battle to secure justice for Robin. The judicial system remains weighted in favour of the police.

This was cruelly underlined on Friday of last week when a High Court judge struck out a previous verdict of unlawful killing delivered by a coroner’s court jury in October 2003 on the case of Roger Sylvester.

Roger died in February 1999 while being restrained by eight police officers. The judge ruled that the jury was misdirected by the coroner. He also refused to allow a new inquest.

“Roger Sylvester was a young, healthy black man who died because of the fatal restraint used against him by police officers,” said Deborah Coles of campaigning group Inquest.“Yet seemingly no one is to be held accountable for his death. What kind of justice system is this?”

After the High Court ruling Glen Smyth, the chaiman of the Metropolitan Police Federation, stood a few feet away from the distraught Sylvester family and branded them “emotional and irrational”.

Last month the Metropolitan Police reinstated the eight officers involved in Roger’s death back to active service, in anticipation of the judge’s verdict.

“This sends a signal to the black community that we will never get justice for our loved ones,” said Rupert Sylvester, Roger’s father. 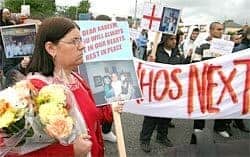 Death in custody: Standing together in Burnley to win justice for Nadeem Khan