This article is over 20 years, 11 months old
Around 900 postal workers were on unofficial illegal strike in Oxfordshire as Socialist Worker went to press.
Downloading PDF. Please wait...
Saturday 10 February 2001

Around 900 postal workers were on unofficial illegal strike in Oxfordshire as Socialist Worker went to press.

The strike is the latest in the rank and file resistance to Post Office attacks and the demands for ‘flexibility’ and ‘market discipline’. The strike began at the city centre at the end of last week. Management had broken agreements over preparation of letters for delivery and sorting.

Other workers then joined the strike in solidarity across the region.

The specific issue was then settled, but management refused to pledge there would be no victimisations. CWU members voted unanimously to keep up the battle.

Royal Mail tried to move the Oxford post to other offices. But it was blacked by workers in Wolverhampton, Portsmouth, Coventry and elsewhere.

An Oxfordshire CWU member told Socialist Worker, ‘People are fed up with the intimidation and bullying which are so much a part of Royal Mail’s management style. It is incredible but the reality is that we have to walk out every few months just to get these people off our backs for a bit. That’s why it is important not to give an inch when they try to discipline people. It would mean open season against the union and the workforce. We aren’t frightened of the anti-union laws. The Post Office has important customers in Oxford who start screaming when the post stops. We should use that power.’ 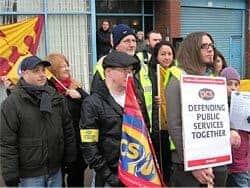 Solid strike at Jobcentre Plus