THE NAZI National Front was halted last Saturday in its attempt to attack Leicester’s Gay and Lesbian Mardi Gras parade. Local campaigners vowed that a city centre march would go ahead after the original parade had been cancelled earlier this year following threats from Nazis.

In the run up to last Saturday’s parade organisers again received threats of violence from Nazis. Despite this, police allowed small bands of National Front skinheads to group in Leicester city centre. The police also allowed local “nationalist” Clive Potter to hold a “silent majority” protest against the Mardi Gras.

Potter was a prominent member of the National Democrats, a split from the Nazi National Front. He works at the Leicester Royal Infirmary and was a UNISON shop steward until suspended by the union after pressure from anti-Nazi campaigners. On the day people refused to be intimidated. Mardi Gras marcher Gillian told Socialist Worker, “I’m pretty angry that the NF are in Leicester. We have to face them peacefully, but we should block them.”

As the Mardi Gras assembled, around 20 NF members held a “protest” in the city’s shopping precinct. They gathered no support from shoppers in their sick attempt to link the paedophile issue with the gay community.

The Nazis were opposed by local members of the Anti Nazi League (ANL), who were joined by supporters from London, Nottingham and elsewhere. Yet it was the ANL that was targeted by the police instead of the Nazis. All the warm words by the police after the trial of Nazi bomber David Copeland about protecting minorities were shown to be worthless.

As local Asian Davinder angrily said, “It’s crazy that the police are allowing the Nazis to protest. You don’t need a degree to see what the scum are all about.” As the Mardi Gras parade approached the place where the Nazis were gathered, the police pushed back the ANL cordon. Incredibly, they then allowed the NF to come nearly right up to the march.

The NF was allowed to mouth obscenities. In contrast city centre shoppers clapped and cheered the Mardi Gras parade. The police even stopped the parade for ten minutes while the NF supporters stood across the route, screaming abuse and giving Nazi salutes.

The 300-strong parade eventually marched into the local park victorious. But the need for an anti-Nazi mobilisation was clear. If people hadn’t physically opposed the NF, the march would have been in danger. 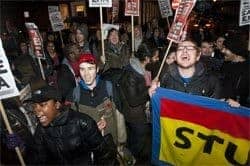 Students return to the struggle