The teachers want a guarantee that the school will not be converted into a privately-run academy. NUT, NASUWT and ATL union members struck five times last year as part of the dispute.

One worker told Socialist Worker that there were strong picket lines this morning and that the NUT is “absolutely solid”. Strikers were pleased that NASUWT members are striking with them today and tomorrow.

However, NASUWT members have decided not to strike next week, although they could rejoin future walkouts. And later today ATL members were set to announce the result of a ballot on whether to join the strikes.

Around 100 people came to a parents’ meeting yesterday to discuss the dispute. One teacher said, “It was a great meeting. At first some parents were saying that teachers should be in school.

“But teachers explained that we have been trying to talk to management to resolve this issue for months. By the end parents agreed that it is management that is the problem. A stack of parents turned up this morning to join us on the picket line.”

Teachers have been spurred on in their dispute by bosses’ suspension of the school’s NUT union rep Simon O’Hara. Over 2,500 people have signed an online petition demanding his reinstatement. The local Labour Party is taking the issue up, and workers from other unions have pledged solidarity with Simon.

Workers see bosses’ suspension of Simon as a desperate attempt to undermine their anti-academy fight. They are determined to win – and to get Simon reinstated.

Teacher Sabina said, “We are striking because management refuse to negotiate with us. They think they can get away with anything and they want to make it seem like we are the bad guys.

“But academies are businesses and they don’t care about the kids.”

Another teacher said, “Schools around us have become academies and they can’t get staff because they treat teachers badly. They have smart new uniforms but no qualified science and maths teachers.”

Striker Fatima said the dispute was part of a much bigger battle. “It should be the doctors, nurses and teachers striking together,” she said. “Without us society would collapse. The government are a minority but we are the majority.” 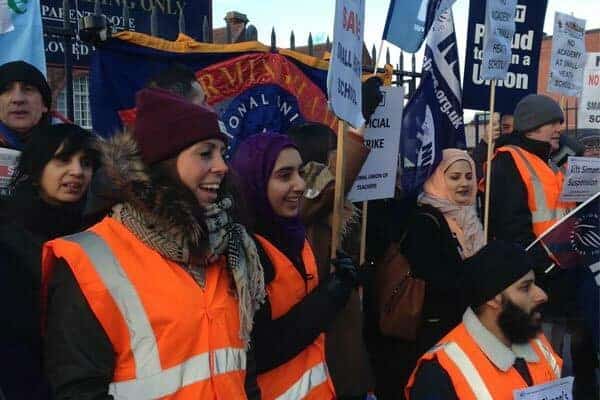 Singing pickets in Small Heath defend their school and their rep