THE HATED Margaret Thatcher was forced to resign as prime minister ten years ago this week in the aftermath of the Trafalgar Square poll tax riot. In 1997 Tony Blair won a landslide when millions voted against everything Thatcher stood for.

Yet Thatcher’s central legacy, privatisation, has been embraced by New Labour. New Labour is extending privatisation to areas Thatcher could only dream about. We are having to pay through collapsing services, and even with our lives in train crashes such as Paddington and Hatfield.

Public money continues to be shovelled into the bank accounts of privateers as subsidies fund huge salaries and share options. Railtrack’s Gerald Corbett finally resigned last week. Instead of being put in the dock for murder, he is to be rewarded with a millionpound payoff. Rail companies announced this week that the journey time between Edinburgh and London is now eight and a half hours.

Blair now wants to privatise air traffic control and London Underground, while allowing business to sink its claws deeper into health and education. Education secretary David Blunkett’s proudest boast about his proposed half a dozen “city academies” is that they will be “owned and run” by businesses.

Health secretary Alan Milburn’s “big idea” is to throw public money to private health companies to operate on NHS patients. {New Labour is privatisating areas Thatcher could only dream about| …and her protege

EAST LONDON’S Hackney council expects to be 76 million in the red next year-thanks partly to privatisation.

That figure comes from leaked minutes of a meeting between senior councillors who lead the Labour-Tory coalition. This is almost double the deficit the council admitted publicly.

It says this will mean savage cuts to frontline services and council tax rises of 10 percent a year for the next three years. The authors of this disaster are the present council policies and lack of central government funding. Yet most of the press continue to blame the supposed legacy of the council’s “loony left” past.

But the left has not controlled Hackney council for over a decade. Press and politicians also seem to think that pushing through privatisation is the answer to the crisis.

Yet a chunk of the deficit is a result of shambolic privatisation schemes such as handing housing benefits to ITNet, which has cost Hackney up to 25 million. Ministers last week used a report by privatised schools inspectors Ofsted into Hackney to hide the huge spending cuts schools have suffered.

They suggested that privatising the whole of the local education authority might be an answer. Parts of the authority have already been sold to Nord Anglia.

But even Ofsted admits that “the outsourced school improvement functions are currently…still discharged in an unsatisfactory way”.

OVER 600 Dudley hospital workers in the West Midlands began their seventh round of strikes against privatisation on Monday. Dudley is one of the longest running strikes in the NHS, having taken 42 days before this round of action.

The strikers are protesting against the effect New Labour’s Private Finance Initiative (PFI) will have on their jobs and services.

“PFI means turning over our health service to private companies to make a lot of money out of,” said Jeremy, one of the strikers. “What we’re doing in Dudley is fighting to stop the end of the NHS. For us it means that everything will change-jobs, pensions, working practices. Once the private companies get in with us it’ll affect everybody,” said Liz, a domestic services worker.

The Dudley strikers are joining a lobby of health minister Alan Milburn on Saturday 2 December. The strikers’ union, UNISON, is organising a national day of action for December.

The strikers are intensifying their action by going out for three weeks over Christmas. They are asking for the solidarity of workers across Britain.

THE government’s new watchdog on standards in the NHS, the Commission for Health Improvement, delivered three damning reports last week. The most appalling case was the treatment of elderly mentally ill patients at Lakeland NHS trust in Carlisle.

One patient was strapped to a commode, while others were fed while they were on their commodes. There was also a report on an Oxford heart centre it accused of having a “culture of cronyism”.

These are terrible cases of maltreatment. But the government wants us to believe that such cases are simply down to individuals or “old fashioned” management practices.

It has lashed out at top consultants and “vested interests” in the NHS. These attacks and the new health watchdog are both part of the government’s attempt to create a culture of blame and shame in the NHS.

It hopes this will divert attention away from the central problem-its continuation of years of Tory underfunding. The government’s only answer is to privatise more areas of the NHS.

Alan Milburn said two weeks ago that he wanted to see the Private Finance Initiative “in the whole of the NHS, from doctors’ surgeries to social care facilities”.

Student nurses out in the cold

STUDENT NURSES in London are being evicted from their homes to make way for the development of luxury flats.

Student nurses who joined a protest outside the Department of Health last week told Socialist Worker about their plight. Lizzie Bastin says, “In March we will have to move out of our home at St Andrew’s to accommodation we can’t afford. We get 470 a month. Our new accommodation will be over 300. How can you live on under 200 a month?”

Tania Collyer adds, “What kind of message does that send out, when companies can make money while student nurses have to work all hours of the day or starve?” “It is people before profit everywhere, whether it’s Ford, the environment or the health service,” says Adrian Dutty.

THE doctors’ British Medical Association says there is no way the government can meet its promise to guarantee every patient a GP appointment in 48 hours by 2004.

The BMA says this would need at least 10,000 new doctors. The government is only promising an extra 2,000 GPs by 2004. Even this figure is a con. The government has included 1,100 GPs already in training to boost the figure. But these will merely replace those GPs who are retiring. The BMA is also critical of NHS Direct.

The government is making ringing the call centre the only way a patient will have access to emergency out of hours treatment by 2004. The BMA says, “NHS Direct was introduced too quickly last winter and wasn’t able to cope.”

POVERTY-stricken pensioners are the latest victims of New Labour’s obsession with privatisation.

Some 130,000 of them have been cheated out of 43.5 million by the privatisation of the computerised payments system. The culprit is giant accountancy firm Andersen Consulting, which took over the National Insurance computer system in 1997 under a PFI scheme.

It has not worked properly since then. The privatisation of the Passport Office’s computers also led to chaos in the summer of last year.

Yet a lack of extinguishers was a key factor behind the horrific deaths in the recent Austrian ski train disaster.

A FORTUNE in public money is to be used to bribe companies to take over Britain’s nuclear industry. Investors said they would not touch British Nuclear Fuels when a report revealed that it would cost at least 1 billion to wind down old reactors and store their deadly waste.

So New Labour is to create a quango to foot the bill.

HMRC Lothians walk out in fight for decent conditions 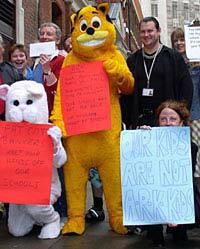 Fighting off the school fat cats in Islington