This article is over 19 years, 10 months old
PAUL FOOT, the Socialist Alliance candidate for mayor of Hackney in east London, has helped to expose manoeuvres linking the election process and the council's strike-busting operation against library workers.
Downloading PDF. Please wait...
Saturday 21 September 2002

PAUL FOOT, the Socialist Alliance candidate for mayor of Hackney in east London, has helped to expose manoeuvres linking the election process and the council’s strike-busting operation against library workers.

In October last year Hackney Labour council stopped paying a Saturday supplement to library workers. Workers have struck solidly every Saturday for ten months in response. In an effort to break the action the council wants to open three of the borough’s libraries with casual staff. They would work for just seven hours a week on Saturdays.

However, another four libraries would remain closed indefinitely. The council calls this a ‘Best Value’ plan, but it will cost more than twice as much as giving existing staff their Saturday payment.

The use of casuals was supposed to start this month. But the council’s chief executive, £200,000 a year Max Caller, suddenly instructed library managers to postpone the move until after the mayoral election on 17 October. The leaked memo implies collusion with Jules Pipe, the leader of the council, who is the Labour candidate in the election.

Caller is the returning officer in the election. His memo said he agreed with Pipe that ‘it would be sensible to defer the opening on Saturdays to avoid unnecessary industrial action during the election campaign’.

Paul Foot and the library workers’ Unison union said they were angry that the returning officer in the election was agreeing policy with the New Labour candidate on the basis of how it will affect the mayoral elections.

Paul Foot said, ‘If Councillor Pipe wants to prevent industrial action he should pay library workers the nationally agreed rate for Saturdays, and not bring in scab labour to try and bust the union.It shows the degree to which Pipe and New Labour treat democracy and workers’ rights with contempt.’

Library workers planned a public meeting this week, and are lobbying the council meeting at the town hall in Mare Street from 6pm on Wednesday 25 September.

Meanwhile Paul Foot’s campaign is gathering momentum. He has spoken to groups of hospital workers, nursery parents and disabled people fighting for their rights. He has also addressed meetings in local areas around Hackney. The election will be a postal ballot, with voting papers going out from 4 October.

It is important that Paul Foot’s message gets home powerfully. There are a large number of people who will like his promise to be a ‘campaigning and investigative’ mayor.

The Socialist Alliance is urging all its supporters to help with the ‘Foot for mayor’ campaign. 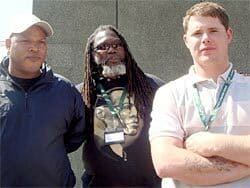