PCS conference discusses how to take on the Tories’ austerity

This article is over 7 years, 2 months old
By Nick Clark in Brighton
Downloading PDF. Please wait...
Tuesday 19 May 2015

The civil service workers’ PCS union held its national and group conferences in Brighton this week. They were ongoing as Socialist Worker went to press, set to run from Monday to Thursday of this week.

Key debates focused on the Tories’ plans to extend the scheme that stops the union from collecting membership subs by “check off”.

The removal of check off has badly hit PCS’ membership and funds.

And before conference they published a strategic review aimed at looking at ways to rebuild the union.

Socialist Workers Party members in the PCS were opposed to suspending elections. But they welcomed the strategic review as an opportunity to strengthen union organisation and build a fightback.

Pete, a PCS rep in Birmingham, spoke at a fringe meeting held on Monday of this week to debate the review.

He said, “I disagree with the decision over the NEC elections. But I’m in favour of this review.

“But the review has got to be as open as possible so that our members can understand it, they can engage with it in as many was as they can, and crucially we understand how the outcome comes about”.

PCS general secretary Mark Serwotka said the review was a chance to, “celebrate our successes, work out why they happened and why they were successes, and seek to try and model the union around what has worked well—but also being prepared to confront our weaknesses.”

Pointing to the successes he said, “Have a look at those disputes that we’ll be hearing about this week—the National Gallery, the Windsor Castle dispute. Look at DWP Garston where we saw massive participation on the picket lines”.

There was still a sense of demoralisation on the conference floor as delegates tried to come to terms with the Tory election victory.

But there was also an indication of fights to come.

Delegates in the DWP group conference of workers from the Department for Work and Pensions passed a number of motions pledging to resist benefit sanctions, Universal Credit and attacks on people on benefits.

And they unanimously supported a motion congratulating striking workers at a DWP call centre in Garston.

The strike managed to win concessions after bosses forced the closure of their office.

Dave Owens, PCS rep from Garston, told the conference, “That dispute was important because we now have a Tory government—there’s going to be more disputes like Garston.

“That means we need to learn the lessons of Garston so we can build up a fight in the future.”

He said, “If we stand here and don’t do anything we know that we will lose jobs. We will lose our public sector status. And for our families and our friends our future looks miserable.

“Management and the government are going to be full throttle. We can win. Our own examples in PCS tell us that all too clearly.

“But if we stand up to be counted—Land Registry, the National Gallery, the people in Windsor Castle—show us that there is a different way”.

And Serwotka called on all PCS branches the country to mobilise for the national demo in Trafalgar Square on 30 May demanding an end to privatisation at the National Gallery and the reinstatement of victimised PCS rep Candy Udwin.

He said, “We’re going to give a message to the National Gallery that we will not accept their privatisation and Candy should be given her job back”.

Candy agreed. She received a standing ovation when she spoke at the Revenue and Customs group conference on Monday of this week.

She said, “We hope that everybody comes down to Trafalgar Square on 30 May and makes that as big as possible.

“But we hope that won’t just be useful for us, but that it will help build the national demonstration on 20 June that the Peoples’ Assembly has called”.

She added, “If we win it won’t just be important to me and the people who work at the gallery. It will be the kind of victory that can help us build the kind of movement that we now desperately need to wipe the smile of David Cameron’s face”. 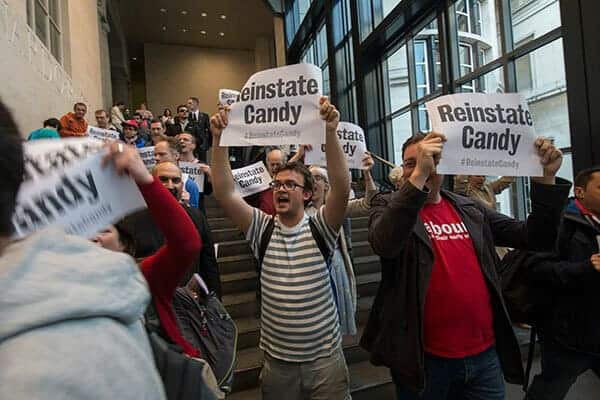