PCS conference: What would a merger mean?

This article is over 9 years, 7 months old
Delegates passed a motion committing the union to "explore with Unite how the relationship between the two unions can be developed further".
By Julie Sherry at PCS conference
Downloading PDF. Please wait...
Tuesday 29 May 2012

Delegates passed a motion committing the union to “explore with Unite how the relationship between the two unions can be developed further”.

The discussion made clear that a merger between PCS and Unite unions was a possibility. Delegates questioned what this would mean for union democracy. They raised Unite’s affiliation to the Labour Party.

PCS general secretary Mark Serwotka said a merger was not on the table, there were just talks. He said the PCS would not abandon its leading role in the fightback or compromise the union’s democracy—its annual delegate conferences and political independence.

Some union mergers can bring workers in particular industries into one union and strengthen rank and file workers’ ability to organise.

But they can also be used as a shortcut to boosting membership. But the best way to build is to lead struggle.

A merger between Unite and the PCS sidesteps the task of rebuilding rank and file strength and instead focuses on top down solutions. 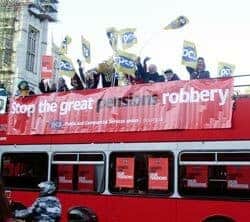