NEW LABOUR’S worship of the market and big business is killing us. Ask the families of the 75 people who have suffered agonising deaths due to BSE so far. Ask the relatives and friends of those killed by profiteering on the railways, from the 31 victims at Paddington a year ago to the four killed at Hatfield just over a week ago.

Or ask the family of air passenger Emma Christoffersen, who died this week as a result of airlines chasing greater profit by cramming in ever more passengers regardless of the health risks (except in business and first class, of course). BSE was the result of a filthy alliance of the meat industry, Tory ministers, top civil servants and scientific “advisers” in the pockets of the beef barons. In the name of the free market and deregulation they brushed aside safety concerns.

When the scandal broke, the same industry that gave us BSE then demanded, and got, billions in “compensation” from the Tories and New Labour. This is no nightmare story from the past. Many more people are yet to die because of BSE. The government is still bankrolling the beef industry. And last week we found out that potentially BSE-infected beef products have been used in polio vaccine.

Every time big business is allowed to run rampant, every time safety checks are ripped up because they get in the way of share prices, every time a part of the public sector is privatised, ordinary people pay the price. New Labour has chosen to accelerate massively the way in which the free market increasingly dominates our lives.

On Tuesday Tony Blair spoke about the environment. He said that he saw no conflict between profit seeking and “green issues”. Yet Blair has put food magnate Lord Sainsbury in his government and in charge of food science policy.

Blair claims to be tackling global warming, yet he has put Lord Simon from oil giant BP, one of the biggest culprits, in his government. Every government advisory body is stuffed with the money men and their cronies. Instead of help going to pensioners or to those in poverty, the government hands money to big business.

Railtrack got a massive 5 billion injection of cash from the government days after the Hatfield crash. Much of the money given to Railtrack will flow straight into the bank accounts of its shareholders. On Tuesday New Labour announced it was going to take a rail franchise off Connex.

But who got the contract, and the public subsidy, instead? Go Ahead, which made its profits out of running down bus services across Britain and whose Thames Trains operation is implicated in the Paddington train disaster. Balfour Beatty, the maintenance company involved in Hatfield, is lining itself up to take over safety work on London Underground, thanks to John Prescott’s insistence on tube privatisation.

Yet where is the voice of “our side” amongst all this? Our trade union leaders are silent. They call no action in the interests of ordinary people who are increasingly sickened by New Labour. Faced with this scandalous silence we need to encourage and unite everyone who wants to fight back against the system. At the same time we also need to build a socialist political alternative to New Labour. 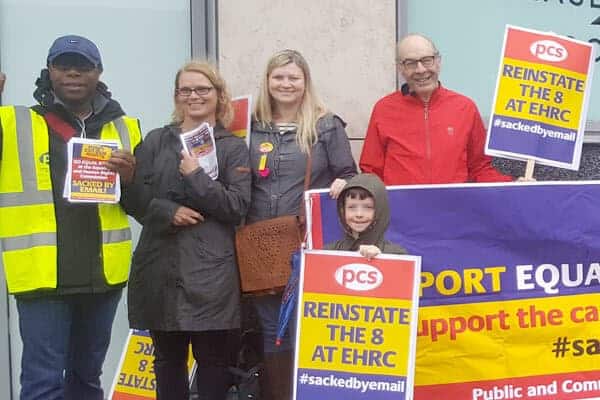 EHRC strikes roll on to Manchester