The company, which employs 700 people, offered workers a 4 percent pay rise from September 2011, but a second consecutive pay freeze this year.

He said, “Although the company claims staff have been coming in to work, they’re largely referring to agency workers who have no grievance with them.

“We’re still very much in dispute.

“They claim to have made a fair and competitive offer, but a zero percent pay rise doesn’t reflect that.

“We’ll continue however long it takes for the company to realise these workers have made them a lot of money and recognise the work they do.”

Fujitsu workers fight for pensions, jobs and pay with first national IT strike 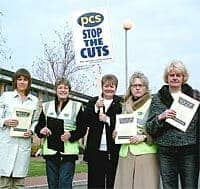 Victories for the left in the PCS union