The Tories are hell-bent on forcing public sector workers to work longer and pay higher pension contributions to receive lower pensions on retirement.

Ministers say they have made changes to their planned reforms that will protect low-paid and older workers. They even claim some workers will receive better pensions than they do at present.

These are all lies. And the fact they think we will swallow them shows the utter contempt they have for working people.

LIE—‘Workers will get as good, if not better, pensions’

This would cut many workers’ pensions significantly—and the average public sector pension is already less than £5,000 a year.

The government hasn’t backed off from imposing career average schemes.

Instead it has proposed increasing the rate at which workers build up their pensions benefit—known as the accrual rate.

But this doesn’t mean a better deal for workers. The TUC points out that the government has overestimated career average earnings. That means they are also overestimating eventual pension payouts.

And the switch from the RPI to CPI rate of recording inflation has already hit pensions.

The PCS union calculates its members will lose an average £16,400 over 20 years of retirement because of this change alone.

LIE—‘Older workers will see no change to their pensions’

The government says workers who are within ten years of the retirement age on 1 April next year won’t be forced into career average schemes.

Some have claimed this means around a million workers will retire on the same pension terms that they are on at present.

But this isn’t the case. Older workers will still have to pay more in monthly contributions. For many workers this will mean paying a full 50 percent more than they pay now.

This extra money will not be used to shore up allegedly “ailing” public sector pension schemes. It will go straight to the government to help pay off the deficit.

The Tories say workers earning under £15,000 a year won’t have to pay any more each month.

But this is another lie.

The £15,000 figure refers to the full-time equivalent wage rather than what workers actually get in their pay packet.

half-time hours. The government would say her full-time equivalent wage is £22,000. So her pension contributions would still rise.

The PCS says this exemption for low-paid workers would only cover 4 percent of its members.

It’s true that many private sector workers have poor pensions, or no pension at all. But that is no reason to attack the pensions of other workers.

The Tory attacks would throw millions more workers into poverty in their old age.

And if they get away with this attack, private sector bosses will come after the pensions of their workers too.

The government wants to divide workers by playing the public sector off against the private.

But it’s the bosses that get the real “gold-plated” pensions—not public sector workers. 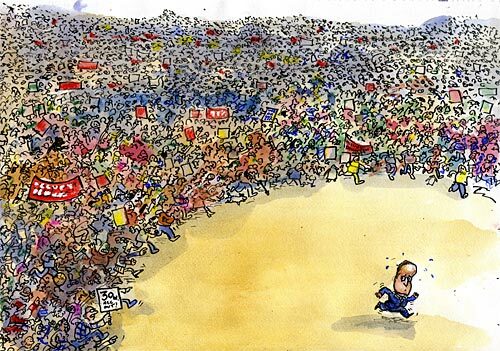 We're coming to get you, Cameron