This article is over 9 years, 4 months old
Susan Alexander has accused police of executing her son, Azelle Rodney, as he sat in a car in Edgware, north London, in April 2005.
Downloading PDF. Please wait...
Tuesday 11 September 2012

Susan Alexander has accused police of executing her son, Azelle Rodney, as he sat in a car in Edgware, north London, in April 2005.

Susan spoke at an inquiry into Azelle’s death, which began on Monday last week. She said police had “no good reason” to gun down her 24 year old son.

Armed police surrounded the car Azelle was in with Wesley Lovell and Frank Graham.

They say they suspected that the men were about to commit an armed robbery.

One officer, known only as E7, opened fire within seconds of pulling up next to the car. E7’s solicitor told the inquiry that “he believed he had no alternative but to fire”. The officer claimed he saw Azelle reaching for a gun inside the car.

The inquiry has heard that Azelle was shot six times. A police video, filmed by a firearms officer, has been released showing police pursuing the car Azelle was in. 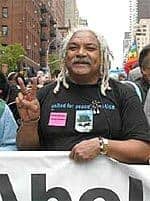 Activists across the globe build for World Against War conference