This article is over 12 years, 2 months old
Babar Ahmad is a south London IT worker who has been in jail for five years. The Metropolitan Police admitted to beating him up in December 2003 and paid him £60,000 in compensation.
Downloading PDF. Please wait...
Tuesday 03 November 2009

Babar Ahmad is a south London IT worker who has been in jail for five years. The Metropolitan Police admitted to beating him up in December 2003 and paid him £60,000 in compensation.

But Babar is still fighting attempts to extradite him to the US over allegations of “terrorism”. He has been detained without charge or trial since August 2004, when the US demanded he was handed over.

The statement reads as follows.

On 3 November 2009 PC Mark Jones of 1 Area Tactical Support Group (TSG) at Paddington London was acquitted of racially aggravated assault, assault and misfeasance in public office following an incident in the Edgeware Road on 1 June 2007.

PC Mark Jones was the principal perpetrator in the assault upon Babar Ahmad on 2 December 2003.

On 18 March 2009, Sir Paul Stephenson, Commissioner of the Metropolitan police made an unprecedented admission in Babar Ahmad’s civil litigation. He admitted that his officers had subjected Babar Ahmad to a violent, sustained and unprovoked assault and that he had twice been placed in a life threatening neck hold in the back of a TSG carrier. He agreed to pay Babar Ahmad compensation and exemplary damages.

The exemplary damages were intended to punish the Commissioner for the brutal actions of his officers.

Mr Justice Holroyde ordered that the press should not report PC Jones’ true identity nor any of the similar fact allegations against PC Jones until after the conclusion of this criminal trial.

Babar Ahmad relied upon overwhelming factual, expert and photographic evidence in support of his claim that he was brutally assaulted by TSG officers including PC Jones. He also adduced evidence from a whistle blower, PC Onwugbonu and others that on 1 June 2007 PC Jones committed a strikingly similar assault upon Basil Khan.

The jury has rejected those same allegations in this criminal trial. However, the jury was not informed of Babar Ahmad’s allegations nor the outcome of his litigation. On the contrary, PC Jones was presented to the jury at Kingston Crown Court by HHJ Southwell as an officer of “unblemished character.”

The High Court in Babar Ahmad’s case also heard that between July 1993 and May 2007, PC Jones had been the subject of 31 complaints by members of the public, 26 of those complaints concerned allegations of assault of which at least 16 (60 percent) had been communicated by black or Asian men. Further Inspector Paul Davis, who offered character evidence for PC Jones in this trial, and who supervised the assault upon Babar Ahmad on 2 December 2003, had 15 complaints during the same period, 11 of which concerned allegations of assault of which at least seven (60 percent) concerned black or Asian men. This background was not revealed to the jury at Kingston Crown Court.

The Commissioner’s solicitors asserted that there was no similar fact evidence against PC Jones or the other officers who had assaulted Babar Ahmad. However, when Basil Khan contacted Bhatt Murphy and explained his allegations against PC Jones, it became clear that this assertion was entirely erroneous. Bearing in mind this shocking sequence of events, Mr Justice Eady ordered the Commissioner to disclose the officers’ entire complaint history. The Commissioner complained that due to the “sheer volume” of complaints against these officers, it could not comply and unsuccessful sought to be relieved of the burden. Some days later the Commissioner’s lawyers informed the High Court that “a number of large mail sacks” had been “mislaid in the internal dispatch of the MPS”, containing the officers’ complaint files.

Officers refusing to give evidence

PC Jones, PC James-Bowen, PC Cowley and PC Donohue (the officers who assaulted Babar Ahmad) and their supervising officer PS (now Inspector) Davis had refused to give evidence on behalf of the Commissioner no doubt to limit the risk of prosecution. The Commissioner took no action to compel them to give evidence and no disciplinary action has followed.

On 26 March 2009, the Deputy Commissioner announced a review of the circumstances surrounding Mr Ahmad’s litigation. Because the Metropolitan Police Authority (MPA) lacked confidence in the independence of that review, Sir Geoffrey Grigson was appointed to offer direction and control of this review. The terms of reference are as follows:

The review has not yet reported. The Metropolitan Police and MPA have declined to indicate whether this review will be made public.

On 25 March 2009, Mr Ahmad invited the DPP to initiate an immediate criminal prosecution against PC Jones, PC James-Bowen, PC Cowley, PC Donohue and Inspector Davis in respect of the events of 2 December 2003. He has declined to do so despite being provided with the overwhelming evidence available in support of the prosecution (and which was marshalled by Babar Ahmad but not by the earlier IPCC supervised complaint investigation). The DPP has declined to reach a decision and Mr Ahmad is bringing judicial review proceedings to challenge that decision.

Also, on 25 March 2009 the DPP was invited to adduce Mr Ahmad’s evidence in the prosecution

of PC Jones. Mr Ahmad has never had the courtesy of a response to that offer.

Fiona Murphy, solicitor for Mr Ahmad of Bhatt Murphy said: “It is deeply concerning that over several years, the Commissioner concealed the pattern of similar allegations against PC Jones and would have continued to do so, if Basil Khan had not contacted Bhatt Murphy solicitors.

“It is a shocking indictment of the Metropolitan Police, the IPCC and the DPP that no officer has faced prosecution in respect of the assault upon Babar Ahmad on 2 December 2003.”

Babar Ahmad’s family’s response to the verdict: ‘We are disappointed with this verdict. Had the Crown Prosecution Service prosecuted PC Mar Jones for assaulting Babar in December 2003 he might not have been left free to go around attacking other Black, Asian and Muslim men.

‘We now call upon Crown Prosecution Service to put PC Mark Jones and his colleagues on trial for brutalising Babar, without any reason, so that this group of rogue police officers can be held to account.

“Over six months have now elapsed since the Commissioner for the Metropolitan Police admitted that his officers carried out a brutal and horrific physical and sexual assault on Babar in December 2003. Despite these admissions, the CPS have failed to prosecute a single officer for any offence. This is reflective of a culture that exists in the UK whereby police officers are able to behave as brutally as they wish with full knowledge that they will not be held to account by the authorities. Almost six years have now passed since Babar was terrorised by these officers and we continue to call for justice to be served.” 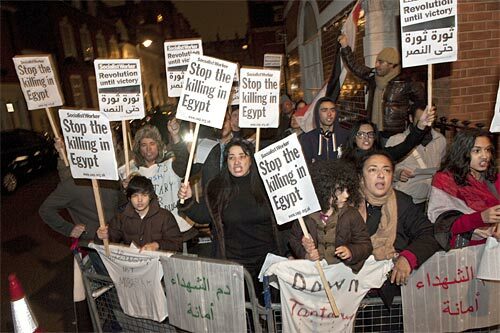