This article is over 11 years, 10 months old
Portuguese public sector workers were to strike on Thursday of this week in protest at the government’s decision to freeze wages.
By Gustavo Toshiaki, reporter, esquerda.net
Downloading PDF. Please wait...
Tuesday 02 March 2010

Portuguese public sector workers were to strike on Thursday of this week in protest at the government’s decision to freeze wages.

It will be the first time since 2006 that all public sector workers have struck together.

Teachers, nurses and tax workers will join the strike.

Real wages for public sector workers have been falling for the past nine years.

But measures announced by the Portuguese government last month were the final straw.

The ruling Socialist Party announced a pay freeze for public sector workers to deal with its budget deficit, in defiance of the trade unions.

The government will also restrict the hiring of new workers.

It wants to cut spending by hiring one worker for every two that leave.

Ana Avoila, coordinator of the Joint Front of Public Administration Trade Unions, explains, “The government has not left any alternative for the workers but to fight.”

The unions plan to hold a national demonstration to defend workers in late May or early June. 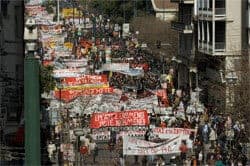 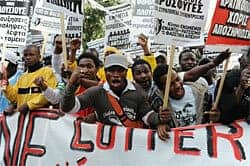 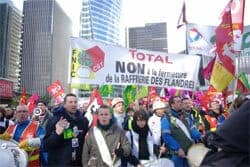