This article is over 18 years, 5 months old
POSTAL WORKERS across Britain start a ballot on Monday on whether to accept a major new deal on pay and conditions.
Downloading PDF. Please wait...
Saturday 10 January 2004

POSTAL WORKERS across Britain start a ballot on Monday on whether to accept a major new deal on pay and conditions.

The unofficial strikes last year have greatly improved what is on offer. Many of the most outrageous proposals which management thought they could ram through after the national ballot went against strikes have now been eliminated.

The strikes had a massive impact and are the reason why bosses were forced to make concessions rather than lay down the law as they wanted. But the deal is still far from perfect. Although it is not explicit in the agreement, it undoubtedly means large job losses-around 7,000 in deliveries alone.

And at a local level some managers are going on the offensive to cut overtime hours and thereby slash pay.

The stronger the local organisation, the more possible it will be to stop job losses and demands for harder working. If enough offices do this then Royal Mail will find it tough to implement the worst aspects of the deal.

The deal: have your say

A view from a CWU union rep

WE NEED to realise that the single day delivery (SDD) system has been designed not around the customer or postal workers but from the workings of a Royal Mail calculator.

I say Royal Mail calculator, as they always seem to produce results different to an ordinary one. On paper they say I will have extra additions to my pay. But my calculations tell me I’m facing a loss of £75 a week.

Our scheduled attendance (SA) or regular overtime at Woodford Green worked before or after shift will go although lots of staff rely on this extra payment. Under SDD’s cost cutting SAs will be phased out.

Also, many jobs are going and yet the workload is not reducing at all. We will absorb the work of our redundant colleagues.

I believe it’s the writing on the wall if we vote yes for this. I see it like a crack in a dam, not losing water but posties each year, with the crack getting bigger and more and more posties slipping through.

As a trade union member of 34 years it has never been my policy to sell jobs to get extra pay. I cannot vote yes on this issue and I hope people follow my lead.

In pictures: Protests in solidarity with London Met students 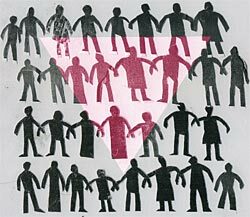