This article is over 10 years, 5 months old
Dozens of armed police smashed their way into a man’s home last week—and claimed they’d had a tip-off that he was a looter.
By Tom Walker
Downloading PDF. Please wait...
Tuesday 23 August 2011

Dozens of armed police smashed their way into a man’s home last week—and claimed they’d had a tip-off that he was a looter.

The innocent man, Delroy Gardner, was lying in bed with his partner Leonie at 2am on Wednesday when the 50 cops burst in and pointed guns in their faces.

Delroy says one officer even pointed a gun at his three-year old son. Leonie suffered an asthma attack and needed an ambulance.

“It was like a horror movie,” Delroy told the Voice newspaper. “If they did this without evidence and just on hearsay, no one is safe in their house. This could happen to anyone.”

The reality is worse. More than 3,000 had been arrested as Socialist Worker went to press, and 1,600 charged.

David Cameron has used the riots as an opportunity for attacks he has always wanted to launch on the poor (see page 3).

Whether they admit or deny being part of the riots, people are facing the full force of the state.

Around 1,400 people have appeared in court so far—and two thirds are remanded in custody to be handed a harsher sentence at a higher court.

And a leaked document reveals the police planned to deny bail to everyone arrested—and tell the courts to do the same.

Over the past week:

“Prison is about punishment, not dealing with the problems. Inside you must obey the system—there is no dignity for prisoners.”

“The system is discriminatory,” he added. “There is a much higher proportion of people from ethnic minority backgrounds in prison than white people.”

Prisons are full to bursting with people charged with such minor “crimes”.

It has risen by more than 100 a day since the riots. The system is just two weeks away from running out of places.

The government has used the overcrowding as an excuse to deport people.

Tory immigration minister Damian Green has said that any non-British nationals found guilty of involvement in the riots would be deported “at the earliest opportunity”.

But the tide has started to turn since the outrageous case of Perry Sutcliffe-Keenan and Jordan Blackshaw from Cheshire.

They were each jailed for four years for “inciting disorder” on Facebook.

Usrula Nevin, who was facing five months in prison for accepting stolen shorts, was freed in the first successful appeal against a riot-related sentence.

A judge changed the sentence to 75 hours unpaid work. Her case shows that those who fight their cases can win.

Activists in Tottenham, north London, were set to launch a defence campaign this week for everyone arrested.

Meanwhile, police have dropped the charges against Dane Williamson, who was wrongly accused of setting fire to a Miss Selfridge store.

He had been denied bail. “I was being treated as if I was already guilty,” he said.

He was only released after the cops admitted their case didn’t stack up.

Unfortunately his life won’t go back to normal.

A fire destroyed Dane’s home in a suspected revenge attack—after the police put his address on Twitter. 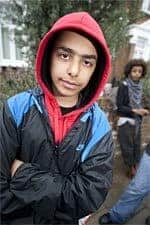 Riots: Harshest sentence yet as dozens more rushed through courts