This article is over 11 years, 7 months old
Delegates to this week’s Communication Workers Union conference reinforced their strong stand against racism and fascism by passing policy against the English Defence League (EDL).
By Yuri Prasad
Downloading PDF. Please wait...
Wednesday 26 May 2010

Delegates to this week’s Communication Workers Union conference reinforced their strong stand against racism and fascism by passing policy against the English Defence League (EDL).

Proposing the motion, Kye Dudd from Bristol talked about how members of the EDL attacked a public meeting organised by Unite Against Fascism (UAF) in his town last year.

He described how a group of thugs from the group attempted to wreck the meeting and intimidate those who had come to take part in it.

Kye refuted the EDL’s claim that it is not racist or Fascist saying, “They came to the meeting shouting abuse against Muslims. The EDL are foot-soldiers for the British National Party (BNP). We need a concerted campaign to stop them.”

Rob Wotherspoon, seconded the motion. He talked about how the EDL were attempting to build among football supporters and reminded delegates that in the 1980s the Nazi National Front were able to parade their banners openly at matches.

Amarjite Singh, secretary of the union’s Cardiff branch, told the conference that the Welsh Defence League is planning a demonstration in his city on Saturday 5 June.

“UAF has united with others to lead the response,” he told delegates. “We are not going to let them march around Cardiff.”

Simon Sapper backed the motion on behalf of the union’s executive.

“We are not going to run away. We’re going to fight back.

“But we’ve also got to get to the people they sucked into their organisation and show them they are wrong.”

Join the demonstration against the Welsh Defence League who are marching in Cardiff on Saturday 5 June. Assemble 11am, Roald Dahl Plass/OvalBasin (adjacent Wales Millennium Centre), Cardiff Bay for a march to City Hall followed by a rally. 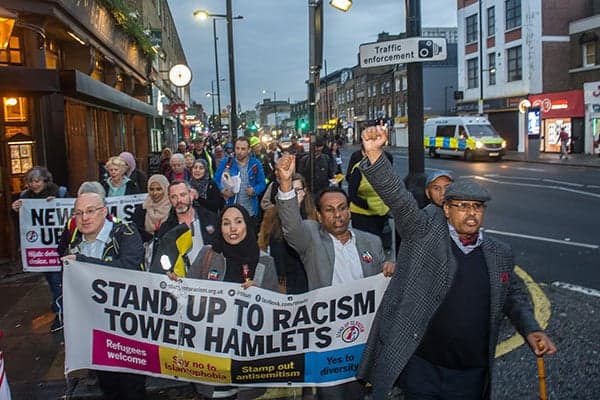 Stand Up To Racism activists on the streets against racist attacks