This article is over 15 years, 11 months old
Royal Mail is set to axe 40,000 workers in a new round of cost cuts, according to the postal workers’ CWU union.
Downloading PDF. Please wait...
Saturday 04 February 2006

Royal Mail is set to axe 40,000 workers in a new round of cost cuts, according to the postal workers’ CWU union.

Bosses admit they are looking at job cuts as they try to slice around £370 million off costs by April, primarily by introducing more automation to the business.

Currently around 20 percent of Royal Mail workers are part-time, but the CWU claims this could double to 40 percent under the latest plans.

Royal Mail would not state the extent of its planned cuts but said further automation would help reduce the manual workload.

“It is too soon to speculate on the size of Royal Mail, but it is no secret that we intend to be more efficient and flexible than our competitors,” a Royal Mail spokesman said.

Billy Hayes, the CWU general secretary said, “Competition should not be an opportunity for the business to drive down pay and conditions and cut our jobs.”

Since Britain’s postal market was opened to full competition on 1 January, more than ten companies have entered the postal business.

The scale of the attacks, due to be discussed at a national meeting for CWU postal reps in a week, demands a national response and national action.

But local battles take on a special significance, particularly the forthcoming strike in Dundee.

Some 280 workers at the city’s east and west delivery offices were to strike this Saturday against cost cuts, and the downgrading of full time jobs to 30-hour a week posts.

After an 80 percent vote for strikes, the 24-hour strike from 11pm on Friday gives warning of the strong feeling about this issue.

Joe Malone, branch secretary of Scotland Number 5 CWU branch which covers Dundee, told Socialist Worker, “The branch remains ready to discuss the issues involved with management, but we are not happy with threats to penalise us for taking entirely legal, balloted industrial action.

“Nor can we accept the erosion of full time work and its replacement by inadequate part time jobs.

“It will be the workforce and the service to the public which suffer if this slide towards increasing part time work is not halted.” 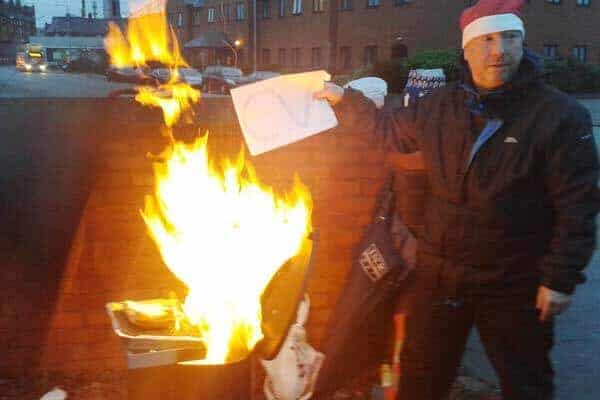