Bosses must negotiate NOT impose change

It’s a huge stride forward for postal workers and for every trade unionist in Britain. A few weeks ago, when postal workers voted against a national strike over pay, our managers said that the ‘world had changed’. They thought they could tear up our national and local agreements and trample over our union.

They thought they could chop off the heads of union activists. How wrong they were! Allan Leighton and Adam Crozier, the hitmen sent in by the Labour government, have got a harsh lesson in what a trade union can be like. They declared war on us and, by strikes, solidarity and sticking together, we have thrown them back. We were said to have broken the law, but emerged unscathed. Bosses laid down six points strikers had to accept in order to get back to work.

Management said we would never get rid of them. They have all been taken off the table. Our national and local agreements are back in place and our union is stronger than ever. We have shown how to take on bullying and harassment. We will not forget how ruthless management have been or the revelations about how they set out to hunt down union reps.

Leighton and Crozier should get the sack. Nor will we forget what this Labour government encouraged management to do. We come back more determined than ever and also more certain that we must look again at how the union uses its political funds.

Victory! At last, a real victory by a big group of workers against a very important employer. 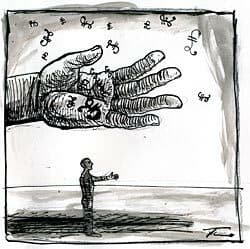 Why are the big charities involved in public services?

Norwich unites against racism and fascism to send EDL packing