More postal workers are to start strike ballots over cuts and attacks on full-time jobs.

The latest offices in the frontline are Antrim in Northern Ireland, Mansfield, and four areas in and around Portsmouth (including Fareham, Waterlooville and Havant).

These ballots follow those already announced at delivery offices in Coventry, Stoke, Brighton and Hove, Bridgwater in Somerset, Wembley in north London and Manvers in South Yorkshire.

Managers are either imposing unagreed savings, changing a full-time job to part-time when it falls vacant, or both.

The situation is in some ways similar to that in February this year which eventually saw 60 offices preparing to ballot for strikes against imposed cuts and attacks on full-time jobs.

That wave of resistance was broken by the national “efficiencies deal” which was supposed to end Royal Mail’s attacks.

The CWU union announced that “an assurance has been achieved that Royal Mail will not seek to replace full-time jobs with part-time jobs”.

But this is precisely what is now happening.

As with many other issues, Royal Mail seems to be trying to see how much it can get away with.

The union’s postal executive has told Royal Mail that it will consider a national strike ballot in four weeks if management fails to deal with the issue in these individual offices and to give an assurance as to future conduct.

Postal workers must push for action in the ballots, but a host of issues are stacking up where national action is possible and may soon become a necessity.

These include the cuts, attempts to bring in teamworking and team leaders, attacks on seniority, mail centre closures, walk sequencing and the new industrial relations agreement. 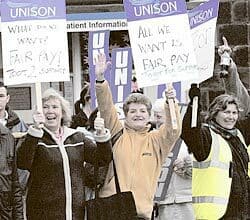 Tube bosses use the law to hold off strike

Activists fight to keep business out of the NHS