This article is over 14 years, 0 months old
Around 100 postal workers at the Burslem delivery office in Stoke-on-Trent were set to commence a strike over Christmas in a long running campaign against a bullying management.
By Yuri Prasad
Downloading PDF. Please wait...
Monday 17 December 2007

Around 100 postal workers at the Burslem delivery office in Stoke-on-Trent were set to commence a strike over Christmas in a long running campaign against a bullying management.

The strike will run from Tuesday until Christmas and then from 27 December to New Year.

Twelve workers – including three union reps – are facing the sack after bosses accused them of “intimidating behaviour”.

The CWU union has countered, saying that the opposite is true and that management are trying to stop union reps from performing their role effectively.

Now the company plans to bus in around 200 managers every day in order prolong and ultimately break the strike.

Mick Kavanagh, who sits on the CWU’s postal executive, told Socialist Worker, “I believe this is about union bashing. Burslem is a well unionised office and I think that management are trying to teach us a lesson.”

“We have put forward a reasonable way in which we can solve this dispute – all the cases should be referred to an independent panel, just as happens when a rep faces disciplinary action.

“But so far Royal Mail has decided not to discuss this option with us.

“Many workers will doubtless be worried about the impact of the strike on themselves and their families over the Christmas period.

“The union is hoping to raise significant amounts of money to help ease that pressure.

“It is now vital that the Burslem strikers get support from the rest of the CWU – and beyond.

“We are appealing for every one of our branches to ‘adopt a striker’ by making donations to the hardship fund.

“My own branch in Coventry has already adopted one one and it would be excellent if other CWU branches and trade unionists could follow suit.

“We know from our recent national dispute about how the company will use managers to undermine strikes.

“It is quite likely that some form of wider solidarity will have to be considered in the future.

“I hope that trade unionists from the Midlands and the north west of England can make a special effort to organise collections and bring them to the picket lines.”

The Burslem office is located at the Scotia Business Park, Scotia Road, Stoke‑on‑Trent ST6 4RG and picketing is expected to be daily from around 6am.

London at sharp end of battle over pay 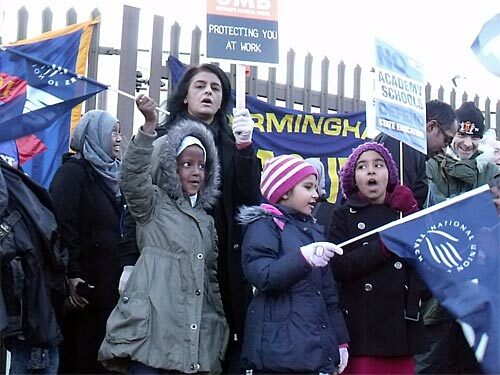 On strike against forced academies