Postal workers have accepted a deal to end their long running dispute with Royal Mail.

The settlement, which was vigorously promoted by the leadership of the CWU union, was endorsed by 66 percent of those who returned their ballot papers.

Many union activists rightly point out that Royal Mail had wanted to use the dispute as a pretext to drive the CWU out of the industry, and that the new deal sees the union firmly in place.

But the large numbers voting against the deal—34 percent—reflects the feelings of many postal workers that the union made too many concessions to management.

They believe that the result is a settlement that does not meet the sacrifices they made during last year’s strikes.

Under the agreement, thousands of jobs will go as scores of mail centres face closure. In addition, many workers in deliveries will find themselves working harder for less money as extra payments for delivering junk mail are incorporated in regular wages.

For these reasons, Socialist Worker supporters in Royal Mail were against calling off the strikes at the end of last year, and called for a no vote in the ballot. 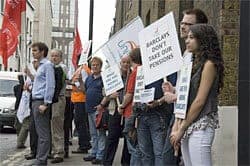 Get behind Shelter workers