NEW LABOUR pledged a huge windfall to the privatised rail companies last week. At the same time the inquiry into the Paddington crash revealed that the train operators have still not completed basic safety measures.

John Prescott is to let privateers off an estimated 1.6 billion in profits due to the Treasury over the next ten years. Yet at the inquiry into the Paddington disaster Alison Forster, the First Great Western trains safety director, admitted there were too few emergency hammers on her company’s train that was involved in the crash.

Trapped passengers have told the inquiry that there was no way they could smash windows to get out of the burning wreck. Forster confessed last week, “I have only appreciated it [increasing the number of hammers] having heard the evidence of passengers at this inquiry.” A Thames Train management witness also admitted that there was nothing at all on the Thames trains to break windows with.

‘Sell off all council houses’

THE government has admitted the real agenda behind its housing plans- the end of council housing. Until now the government has claimed it is motivated by tenant choice. Council tenants, it has claimed, can choose between staying with the council or transferring to a new private landlord.

Another option is for councils themselves to set up what are called “arms length” housing companies, in other words removed from democratic control and answerable to the banks. But government housing official Mike Gahagan told a recent conference that staying with the council is no longer an option. “It is either transfer or an arms length company,” he said.

COUNCILS AND companies trying to privatise council homes tell tenants that their rents will be guaranteed after privatisation. Most privateers offer a five year limit to rent rises of inflation plus 1 percent. But as privatisations have run into opposition, councils and the private housing companies have responded by offering longer guarantees, in some cases for up to ten years. The government has moved to make such guarantees illegal. It has written to all councils planning transfer this year saying that any guarantee over five years “should no longer be permitted as part of the transfer proposals”.

Get the corporations off our backs 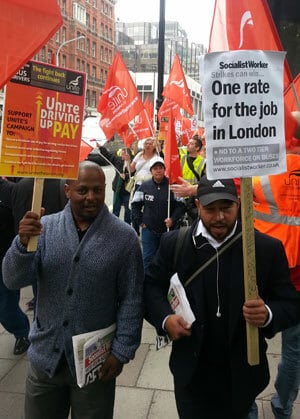