This article is over 17 years, 10 months old
THE LAUNCH of Unite Against Fascism in the north west of England made front page news in Manchester last week. The Manchester Evening News, the leading newspaper in Britain's third biggest city, gave headline coverage of Unite's press conference. It was held in Manchester Town Hall on Friday.
Downloading PDF. Please wait...
Saturday 13 March 2004

THE LAUNCH of Unite Against Fascism in the north west of England made front page news in Manchester last week. The Manchester Evening News, the leading newspaper in Britain’s third biggest city, gave headline coverage of Unite’s press conference. It was held in Manchester Town Hall on Friday.

This is a key area that the British National Party (BNP) has targeted. BNP leader Nick Griffin has announced he intends to stand in the North West Region for the European elections on 10 June. Following the resignation of Burnley councillor Maureen Stowe from the BNP, its representation on Burnley council has reduced by 25 percent since last year’s local elections.

Speakers at the press conference included Julie Hesmondhalgh, the Coronation Street actor, who spoke of hate mail she had received for being anti-BNP. She said defiantly, ‘I believe that most right-minded people oppose the principles and policies of the racist BNP. I am supporting the campaign to encourage people, however disenfranchised by mainstream politics, to register to vote and to use that vote in the upcoming elections.’

Gary Titley MEP, who is leader of the Labour group in the European Parliament, said, ‘I very much welcome the launch of Unite Against Fascism in the north west. We have already made big strides forward in this region, halting the BNP in its tracks. But we can’t stop now. We must miss no opportunity to expose the BNP for what they are and show that their message of intolerance and hatred has no place in the north west of England.’

FAROQ, FARIBORZ and Mokhtar, three asylum seekers in Glasgow, have been on hunger strike for more than two weeks. They are Kurds from Iran who the government wants to send back to face persecution. They have sewn up their lips and are becoming increasingly weak as a result of the hunger strike.

A statement has been launched to protest against the Home Office’s decision to deport them. Thirteen members of the Scottish Parliament, poet Liz Lochhead, human rights lawyer Aamer Anwar and many others have signed the statement. To add your name to the statement phone the Glasgow Campaign to Welcome Refugees on 07870 286 632.

SEVEN racist police officers forced to resign after being shown in The Secret Policeman documentary will escape prosecution. The shocking documentary was shown on the BBC last year. Reporter Mark Daly joined Greater Manchester Police as a trainee. He filmed officers spouting their racist views.

The police officers were forced to resign, but the Crown Prosecution Service has disgracefully decided that the seven officers will not be prosecuted. Two more cases are still being considered.

SOME 500 people packed out an extraordinary meeting in Exeter, Devon, on Monday of this week. The Exeter Stop the War Coalition called the meeting in the run-up to the 20 March demonstration.

George Galloway MP spoke alongside Ghada Razuki from Stop the War Coalition and Shabir Ahmed from Exeter Islamic Centre. According to one of the organisers of the meeting, ‘It tapped into networks of people across Exeter and around Devon. ‘The meeting had young and old people, including a large number of university students. Four union officials from the postal workers came to the meeting.’

In the discussion several speakers supported the idea of standing Respect coalition candidates to challenge New Labour at the polls on 10 June. Local anti-war activists are now confident that they will be able to fill coaches to the 20 March demonstration.

BLUNKETT WANTS to leave the four remaining British detainees to rot in Guantanamo Bay. He will allow them to be tried at the illegal prison camp. The prisoners have already faced two years in prison without being charged of any crime. Two of them are thought to be held in solitary confinement.

If they face any kind of trial, the US government will choose the judge and the defence lawyers. They will be tried in a military court with no jury. Azmat Begg, father of Moazzam, one of those held, said, ‘My son has not been charged with any crime. He has been held for two years. I do not ask for mercy, I ask for justice.’

BLUNKETT HAS also slammed more people in prison than any previous home secretary. For the first time ever the number of people locked up reached 75,000 this week. The figure is already 8,000 over the maximum official capacity. Now Blunkett plans to squeeze 800 more into cells which are normally kept free for safety reasons.

But many of those locked up are in prisons for minor offences such as unpaid fines or shoplifting. And one in six prisoners are on remand-people awaiting trial who have been convicted of no crime.

‘THE 2004 spending review will be the toughest since Labour came to power in 1997.’ So said the Financial Times about chancellor Gordon Brown’s budget on Wednesday of next week. The prospect of more cuts in services, longer waiting for NHS treatment, and schools being starved of cash, will enrage many people across Britain.

Forces ranging from the Organisation for Economic Cooperation and Development (OECD) to the IMF are urging Brown to put up taxes or cut public spending. The tax revenues Brown is relying on are up by 5.5 percent in the last year. This is a long way off the 7.2 percent increase he predicted a year ago. That shortfall means he is under pressure to make cutbacks.

If Brown raised the top rate of tax by just 1 percent, it would generate an extra £1.5 billion a year. Just 1 percent extra on the rate of corporation tax would generate £1.05 billion more. Brown refuses to make those changes. The Institute for Public Policy Research’s senior economist commented that, ‘For most public services spending as a proportion of GDP will have to remain stable or will have to fall in the next parliament.’

That means a freeze on spending-really a cut-or cutbacks in vital services. Brown is scaling back his forecasts of how much will be spent over the coming years. This means spending on education would have to be frozen and social housing and the railways are likely to face cuts. 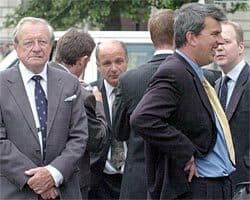