US military flights carrying bombs to Israel will no longer use any British civilian airports. The decision follows protests at Prestwick airport.

A protest against the use of Prestwick airport as a stopover for planes carrying bombs to Israel forced two planes to be rerouted.

Around 250 people occupied the airport in Ayrshire for an hour on Sunday morning. The airport has been a refuelling stopover for US military and cargo planes carrying bombs and other “hazardous” loads to Tel Aviv in Israel.

Glasgow Stop the War Coalition and representatives of the local Lebanese community called the protest at short notice. It was all the angrier because it coincided with news of the latest Israeli atrocity in Qana, Lebanon.

The rally was well attended by local Ayrshire people. Val, a pensioner from Kilmarnock told Socialist Worker, “I’ve never been on a protest like this before. But I’m so angry about what Israel is doing and the fact that our airport is being used to help them do it.

“I read about the protest in this morning’s paper and got a bus here to protest.”

Carol Anne came to the protest with her partner and their nine month old baby daughter. They were on holiday in Tyre in Lebanon when Israel attacked. They had to abandon their holiday and flee.

Carole Anne gave the demonstration a moving, eyewitness account of the atrocities that Israel is carrying out.

Demonstrators were heartened when they heard that the military flight scheduled to land on the day of the protest had been cancelled.

Lots of protesters signed up for the 12 August march in Edinburgh and Stop the War’s Time To Go protest at the Labour Party conference protest in Manchester in September.

Round up of protests across Britain

Around 500 people attended a protest in Brighton and Hove on Sunday – one of the biggest seen since the beginning of the Iraq war.

Over 500 people marched through the centre of Cardiff on Saturday demanding an end to the slaughter in Lebanon and for the immediate withdrawal of Israeli forces.

In Bristol 400 marched on Friday afternoon in opposition to the war in Lebanon and Palestine. There have also been a number of well attended candle lit vigils in local areas of Bristol this week.

Around 1,000 demonstrated through the centre of Leeds on Saturday. It was a good representation of the anti-war movement in Leeds – young and old, women and men, Muslim and non-Muslim, about 50-50 in all respects, but 100 percent united in one thing – anger at Israeli war crimes in Lebanon and Palestine.

On the last Friday of every month hundreds of cyclists join a celebration of cycling starting outside the NFT on London’s South bank.

Last week it paused outside Downing Steet in solidarity with the Stop the War picket and the people of Palestine and Lebanon. People from the picket offered placards to the riders and the ride proceeded with flags and placards attached to the bikes. The ride then carried the message through central London.

On Saturday 130 marched in Portsmouth and 70 in Norwich, while on Sunday 300 marched in Birmingham.

Nazis driven out of Codnor 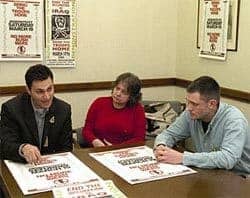