This article is over 11 years, 0 months old
The continuing scandal of the Private Finance Initiative (PFI) in the health service is revealed by the sorry tale of Barnet Hospital in north London.
Downloading PDF. Please wait...
Tuesday 17 May 2011

The continuing scandal of the Private Finance Initiative (PFI) in the health service is revealed by the sorry tale of Barnet Hospital in north London.

The firms that invested in the original scheme have now sold all their shares to HSBC bank for a 67 percent profit.

HSBC’s infrastructure subsidiary is registered in the tax haven of Guernsey.

That means that it pays minimal tax.

But while private firms profit, Barnet and Chase Farm NHS Trust is being forced to make cuts to pay them.

Since October 2010 it has sought 250 job losses and has been told to slash spending by a further £43 million this year.

Successive governments have insisted that PFI is the only way to build new hospitals and schools.

They said it meant the private sector took the “risk” of borrowing, not the state.

Instead, Barnet proves that PFI has turned out to be a giant corporate cash cow.

Meeting debates how to win 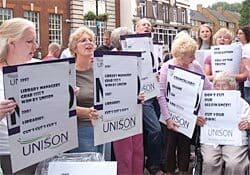