Private firms are cashing in on NHS operations

This article is over 11 years, 1 months old
More than 200,000 NHS operations were carried out by private firms last year—up from just 11 in 2001. The latest government figures reveal the shocking scale of back door privatisation of the service.
Downloading PDF. Please wait...
Tuesday 31 May 2011

More than 200,000 NHS operations were carried out by private firms last year—up from just 11 in 2001. The latest government figures reveal the shocking scale of back door privatisation of the service.

Health secretary Andrew Lansley wants all NHS procedures to be open to the private sector under a clause in his Health and Social Care Bill.

Private health firms are licking their lips at the prospect of getting their profiteering hands on public money.

The Tories say that private firms are more cost effective than the NHS. But a study by the Bureau of Investigative Journalism last week revealed that the opposite is true.

It showed that £500 million has been wasted in a scheme to treat patients in private centres, known as ISTCs.

Firms were paid millions for operations that never took place because contracts drawn up by the New Labour government were so generous.

The “independent providers” received even more cash for their buildings when these contracts came to an end.

They even received “compensation” when the government cut back on a planned second wave of clinics.

This is the “efficiency” that the Tories want to spread throughout the NHS.

Hospital waiting lists are soaring. The number of patients waiting more than 18 weeks for treatment is greater than at any time since 2008, according to department of health figures.

And those waiting for diagnostic tests that can help detect illnesses that need immediate treatment are facing delays. Their numbers have tripled over the past year.

GPs in central Lancashire are facing the sack as NHS managers charged with slashing costs turn their attention to local surgeries.

Dr Edoardo Cervoni has 17 years experience and works in Preston. He has been told that his contract is going to be “terminated”.

He told the GPs’ magazine Pulse, “It really seems that the process of dismantling the NHS is well on the go.” 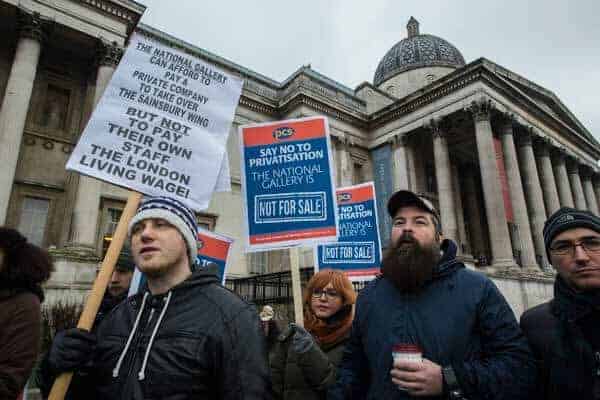 Five-day strike says no to privatisation at London's National Gallery