This article is over 19 years, 11 months old
WHAT PRIVATE healthcare really means was underlined by a shocking case last week. The inquest into the death of Laura Touche uncovered a catalogue of practices at the exclusive Portland private hospital which the coroner said were \"a cause for public concern\".
Downloading PDF. Please wait...
Saturday 26 January 2002

WHAT PRIVATE healthcare really means was underlined by a shocking case last week. The inquest into the death of Laura Touche uncovered a catalogue of practices at the exclusive Portland private hospital which the coroner said were ‘a cause for public concern’.

The revelations came as New Labour health secretary Alan Milburn said that bringing private managers into the NHS was the answer to the crisis battering our health services. No wonder Milburn’s plans sparked outrage even among people who have been loyal New Labour supporters until now.

Shocked union leaders say they will now back protests and action against privatisation. The stakes in the fight for the NHS are high. If Milburn’s plans are not stopped the Portland case shows what the future holds. The Portland hospital is supposed to be among the best that private health can offer.

Yet an investigation 18 months ago found that it had a death rate for pregnant women in its care five times the national average. Last week’s inquest ruled that negligence at the Portland had contributed to Laura Touche’s death after she had given birth.

What’s behind bug scare in Scotland?

PRIVATISATION IN the NHS is at the centre of the debate around the health scare that was sweeping Scotland’s hospitals and schools this week. Glasgow’s Victoria Infirmary closed its doors after three patients died from the salmonella food poisoning bug, and then the hospital was swept by an outbreak of the ‘winter vomiting virus’.

On Tuesday came revelations that hospitals and schools across Scotland had also closed their doors as the airborne vomiting virus spread across the country. The case threw the spotlight onto standards of hygiene in the NHS. The Glasgow Victoria Infirmary cleaning services, like those in many NHS hospitals, have been privatised.

Is this the Third Way?

THE government is planning to send NHS patients to Third World countries for treatment. The insane plan shows just what a state the health service is now in.

Officials at the Department of Health are negotiating with a private company to organise surgical package deals to send NHS patients to Turkey and Tunisia. The plan will cost the NHS a fortune to line the pockets of the private firm organising the surgical trips.

CLEANING SERVICES at Glasgow’s Victoria Infirmary are run by private firm Sodexho. Last summer another hospital cleaning service run by this multinational was slammed by a government watchdog.

Filthy wards at the Epsom and St Helier NHS Trust stank of urine, the watchdog reported. St Helier was labelled the ‘dirtiest hospital in Britain’. Sodexho profits from running the government’s voucher scheme for refugees.

THE NHS crisis is set to get sharply worse in the south east of England in the next two months. It was revealed on Tuesday that health bosses are demanding instant cuts in every area across the region.

The separate London NHS region is also thought to be facing a similar threat. South east regional NHS boss Ruth Carnall has written to local managers saying they are likely to be £60 million over budget by April. She says this is ‘totally unacceptable’ and demands they consider ‘any option’ to make quick cuts. 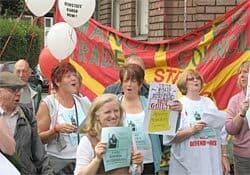 Unison activists appeal against ban on standing in elections 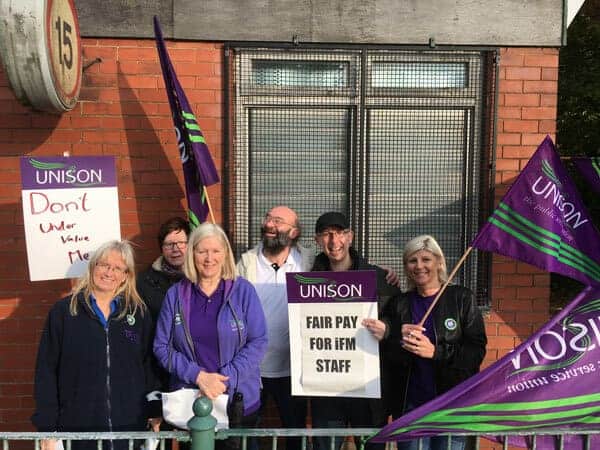