Protesters from Nottingham Keep Our NHS Public protested at a board meeting of Nottingham University Hospitals (NUH) on Thursday of last week.

They are angry at recent revelations that standards of cleanliness at Queen’s Medical Centre and City Hospital have fallen dramatically during the last year.

Since then there has been a sharp rise in infections contracted by patients and staff.

Some years ago NUH contracted catering and cleaning out to private companies whose performance was so bad that the contracts were cancelled and brought back in-house.

Now they have made the same mistake again.

Handing it this contract makes about as much sense as contracting NUH to widen a motorway or build a high-speed railway.

But this is all part of the Tories’ programme to privatise the NHS, to provide opportunities for their business friends to make enormous profits from our public services.

Hospital porters at the John Radcliffe hospital in Oxford have voted to accept a new pay deal.

Bosses tried to push through attacks that would have slashed up to £54 a week from some porters’ wages and forced them to work new shift patterns.

The union said that the porters will not be financially worse off.

Construction workers are set to protest at the Royal Liverpool Hospital site on Friday of this week. Workers on the Carillion-run site are employed outside  the national agreement.

One Liverpool worker reports, “They are mostly self employed individuals who can be finished at the drop of a hat.

“We’ve been informed that there are far too many unskilled workers doing skilled work and risking injury to themselves and other workers. This is a five-year project and an agreement should have been in place before it began.” 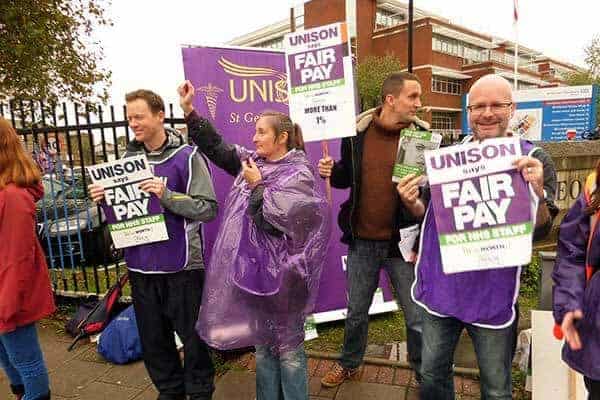 Sita Sembcorp workers protest to demand one rate for the job