Problems for the US after Iraqi elections

“Is the prime minister finally emerging from the shadow of Iraq?” asked James Naughtie on Radio Four’s Today Programme on Monday morning. The media briefings pouring out of 10 Downing Street are clamouring in answer: “Yes!”

The message has been taken up by many journalists. For example, James Blitz wrote in the Financial Times last week, “Fortune has started to smile on the prime minister again—and now we can be forgiven for wondering what Labour can do wrong… After the success of last month’s elections, Iraq seems—at least for now—to be a more hopeful place.”

It was predictable that the White House and Downing Street would desperately spin the Iraqi elections as a success for the occupation of Iraq.

More surprisingly, many people who ought to know better—for example, the left wing philosophers Michael Hardt and Norman Geras—have celebrated the elections as a triumph of democracy. The reality is much more complex.

In the first place, Bush did not want these elections. He and his former proconsul in Iraq, Paul Bremer, wanted a hand-picked assembly to choose a government and draw up a permanent constitution for Iraq.

The elections were forced on the occupation regime by mass protests called by the leading Shia Muslim cleric in Iraq, Grand Ayatollah Ali al-Sistani, in January last year. Bush and Bremer were forced grudgingly to concede elections, but tried to put them off as long as possible.

But, despite all their efforts to prod and manage the Iraqi people, Bush’s and Blair’s preferred candidate, Iyad Allawi, won just 14 percent of the vote.

The United Iraqi Alliance (UIA), backed by Sistani, won 48.5 percent after it campaigned for the US to set a timetable to withdraw from Iraq. The largest single bloc of seats won by the UIA belong to supporters of the radical Shia leader Moqtada al-Sadr, last year wanted dead or alive by the US.

The Washington Post commented on Monday, “In one of the greatest ironies of the US intervention [in Iraq], Iraqis … went to the polls and elected a government with a strong religious base—and very close ties to the Islamic republic [Iran] next door. It is the last thing the administration expected from its costly Iraq policy—$300 billion and counting, US and regional experts say.”

More important still, the turnout in the elections was only 58 percent. This might be a high figure in the US and Britain. But it is low by the standards of liberal democracies generally, and particularly compared to countries where the right to a real vote has only recently been won. When apartheid ended in South Africa in 1994, 85.5 percent of those of voting age took part in elections.

The low turnout in Iraq reflects, of course, that there was a massive boycott of the elections in the centre of the country, where armed resistance to the occupation is strongest. Had these provinces voted as well, then the shares won by the successful lists would probably have been significantly lower.

The final point to note about the elections is that democracy is meant to be about self-government. But there is no way that Iraqis will be allowed to govern themselves as a result of these elections.

Bush and Blair have made it clear that the occupation will continue. “You don’t set timetables,” Bush said after the elections. The US Army recently revealed than it plans to keep its troops in Iraq in the same numbers as at present—120,000—for at least the next two years.

The outcome of the election is a highly fragmented National Assembly. The UIA will be just short of a majority and is itself a coalition.

This will give Iraq’s real ruler—US ambassador John Negroponte—a considerable amount of room for manoeuvre in cobbling together a cabinet that will continue to accept the White House’s orders.

The fact that as shop-worn a figure as Ahmed Chalabi is being talked of as a possible prime minister gives an indication of how things are moving.

Chalabi, an embezzler and crony of US neo-conservatives, helped to supply the phoney intelligence used to justify the war, but later fell out with the US and is now a leader of the UIA.

The occupation regime is also trying to restructure Iraqi society along lines that entrench the dominance of American free-market capitalism. Thus in April 2004 Bremer issued Order 81, which bans Iraqi farmers from their millennia-old practice of freely planting and storing seeds that have now been declared the “intellectual property” of transnational corporations.

The big problem that Bush and Blair face in pursuing these policies is the opposition of the Iraqi people. The elections reflected a division among those resisting the occupation.

Many, particularly in the predominantly Shia areas in southern Iraq, saw the elections as the best way of ending the occupation. Others, mainly but not exclusively in central Iraq, where most Sunni Arabs live, preferred to boycott the elections in solidarity with the armed resistance.

The occupation authorities have encouraged communal divisions between Shia and Sunni Arabs and the Kurds in the north. But it would be a mistake to follow them in seeing Iraqi politics in these communalist terms.

For example, just in the past few days there have been contacts between supporters of Sadr, who espouse radical Shia Islamism and took part in the elections, and the Sunni Association of Muslim Scholars, which supports the resistance and boycotted the elections.

In any case, there is absolutely no sign of any abatement in the armed struggle against the occupation. Why should there be? The reason why Iraqis are fighting is because their country is under foreign occupation, and the elections won’t change this.

This puts a huge responsibility on the shoulders of opponents of the war in the rest of the world—and particularly in occupying countries such as the US, Britain, Italy and Poland.

The only way to put a stop to the fighting and give democracy a real chance in Iraq is to end the occupation and get the troops out.

The next step in achieving this goal—and wiping the grins off Bush’s and Blair’s faces—is to ensure that the worldwide protests against the occupation on 19 March are as massive as possible. 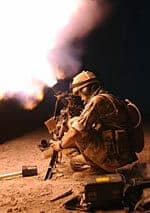