Protest against nuclear base

Protest against nuclear base

AROUND 300 people blockaded the Faslane nuclear base near Helensburgh on Tuesday morning. Police arrested 67 of the protesters including an 86 year old man. Faslane is the main base for the Trident nuclear submarines.

Campaigners stopped entry to the base for two hours. They demanded an end to nuclear weapons and pointed out that Trident costs us 1.5 billion a year. One of those on the protest told Socialist Worker, “We have focused attention again on this obscene site. This issue is not going to go away and we will be back to demonstrate again in February.”

The Health and Safety Executive has decided to take the plant to court again after warning British Nuclear Fuels (BNFL) in March that it should improve safety measures. 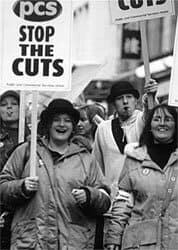