This article is over 9 years, 3 months old
Some 40 supporters of the campaign for justice for Jimmy Mubenga protested outside Crown Prosecution Service offices in central London on Friday of last week.
Downloading PDF. Please wait...
Tuesday 16 October 2012

They were marking the second anniversary of his death in the custody of private firm G4S during a forced deportation. No one has been prosecuted for his death.

Michael Deas from the Stop G4S campaign told Socialist Worker, “We want to raise awareness that they’re still the world’s biggest private security firm and they haven’t changed.” Protesters went on to demonstrate outside G4S’s offices. 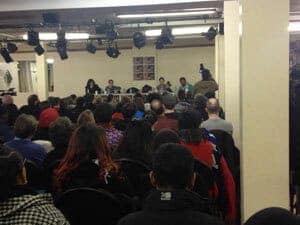 Ferguson Solidarity meetings discuss how to get justice