This article is over 14 years, 1 months old
Up to 10,000 people took to the streets of London today to join the national march against the fascist British National Party (BNP).
Downloading PDF. Please wait...
Saturday 21 June 2008

Up to 10,000 people took to the streets of London today to join the national march against the fascist British National Party (BNP).

The demonstration was called by Unite Against Fascism (UAF) and Love Music Hate Racism (LMHR). It came in response to recent gains by the BNP at the May elections, including the Nazi’s first London assembly seat.

The march was young and angry, with a large turnout from schools and colleges across the country. There was a strong trade union presence on the march too, with contingents from the FBU, UCU, PCS, Unite and several other unions.

Protesters gathered near City Hall, home of the London assembly, and marched to a rally at Trafalgar Square accompanied by a float featuring musicians from the LMHR campaign.

Addressing the rally, Weyman Bennett, joint secretary of UAF, pointed to recent violent attacks on Roma Gypsies and immigrants in Italy as a warning of the dangers of letting fascist parties gain a toehold in the electoral system.

He said the march should be the opening shot in a long campaign to drive the Nazi BNP out of our council chambers, out of the political mainstream, and into the dustbin of history.

Sally Hunt, general secretary of the UCU lecturers’ union, warned that the BNP was aiming to relaunch its student wing in universities and colleges later this year.

She pledged that the union would do its utmost to prevent fascists from organising on campus and spreading race hatred among students.

Mark Serwotka, general secretary of the PCS civil service workers’ union, highlighted how civil service bosses in Hastings had sacked PCS rep Eddie Fleming for his union activity, but turned a blind eye to two Nazis in the workplace standing in elections for the BNP.

Jon McClure from Reverend and the Makers is organising a series of gigs and carnivals against the BNP in the north of England. He called on demonstrators to challenge racism wherever they encountered it and to join the struggle against the BNP.

Many protesters were angry at the attitude of the police towards the anti-fascist march. The police refused to let the LMHR float into Trafalgar Square or allow amplified music at the rally.

A couple of anti-fascist demonstrators were also arrested by police on grounds related to last week’s separate demonstration against George Bush’s visit to London. 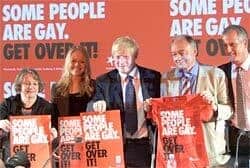 It’s principles, not prejudice, that wins support at the Stonewall London mayoral hustings