This article is over 9 years, 4 months old
Over 500 people rallied outside the offices of Paralympic sponsor Atos in central London last Friday. This was part of a day of action by Disabled People Against Cuts (Dpac) and UK Uncut.
By Dave Sewell
Downloading PDF. Please wait...
Tuesday 04 September 2012

Over 500 people rallied outside the offices of Paralympic sponsor Atos in central London last Friday. This was part of a day of action by Disabled People Against Cuts (Dpac) and UK Uncut.

There were disabled people threatened with losing their benefits, Remploy workers recently made redundant, trade unionists and Occupy London supporters there in solidarity.

Hundreds blockaded and occupied the Department of Work and Pensions (DWP) at Caxton House, protesting against the “work capability assessments” that Atos does on behalf of the government to push disabled people off benefits.

Caroline Butterwick, chair of disabled students at Staffordshire university, had travelled down.

“It’s really unfair that they’re kicking people off their benefits,” she told Socialist Worker. “It hasn’t happened to me yet, but it’s like a threat hanging over us all. It’s not disabled people who caused the financial crisis, so why should we be made to pay for it?”

Tony Bradstock suffers from ME. He fought a long campaign to win back benefits taken away after an Atos assessment.

“I’d like to see the whole assessment system scrapped,” he said. “My doctor understands my health, not some stranger with loaded questions and boxes to tick.”

Many were furious at the hypocrisy of Atos’s sponsorship of the Paralympic Games.

“It’s a cynical attempt to cash in on a celebration of disabled people’s achievements,” said TV actor and comedian Francesca Martinez, who has cerebral palsy.

“I hope people will see through the attempt to get positive publicity for a company that’s causing death and misery across the country.

“So many of the athletes that David Cameron says are inspirational wouldn’t have been able to realise their dreams without the state help he’s trying to take away.”

“One woman came out after her test who had shoulder problems. She said they’d asked her if she could butter her own toast.” 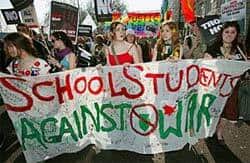