Protesting against the siege of Gaza

This article is over 13 years, 11 months old
Manchester Over 100 people marched through Manchester on Saturday of last week to show solidarity with the people of Gaza.
Downloading PDF. Please wait...
Tuesday 05 February 2008

Over 100 people marched through Manchester on Saturday of last week to show solidarity with the people of Gaza.

The demonstration – called by the campaigning student group Action Palestine with the support of Manchester Palestine Solidarity Campaign and Stop the War – was loud and visible as it marched through the centre of Manchester.

Campaigners at the rally linked the liberation of Palestine with the resistance to imperialism in Iraq and Afghanistan.

Over 200 people attended a rally in Preston last Saturday to demand the lifting of the siege of Gaza.

There were speakers from the FBU and UCU unions, two local imams, Labour and Respect councillors and Chris Nineham from Stop the War.

Preston Stop the War chair Mukhtar Master said, “This was an impressive turnout. It was fantastic to see so many people – and so many young people in particular – turn out to offer solidarity to the people of Gaza.”

The Preston Respect youtube channel has a film of the demonstration, which can be viewed at » www.youtube.com/user/PrestonRespect

Despite a snowstorm, 60 people attended a rally in Glasgow last Saturday to protest at the continued siege of Gaza.

Speakers including Labour MSP Pauline McNeill and ex-Labour leader of Glasgow city council Alex Mosson denounced the role of the US and Israel in enforcing a blockade on the people of Palestine, denying them food, oil and medicine.

Jonathon Shafi from the Stop The War Coalition was cheered when he drew parallels with the inhuman treatment of Gazans and the brutality meted out to the people of Iraq by the occupying forces of the US and British military. 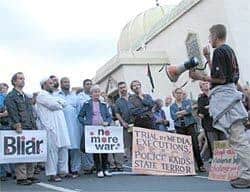 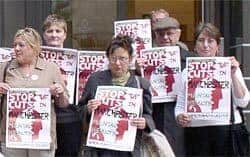