This article is over 9 years, 6 months old
Tory health secretary Jeremy Hunt has confirmed that he intends to close and downgrade swathes of services at Lewisham Hospital.
By Sarah Ensor
Downloading PDF. Please wait...
Tuesday 05 February 2013

Tory health secretary Jeremy Hunt has confirmed that he intends to close and downgrade swathes of services at Lewisham Hospital.

His announcement on Thursday of last week imposed deep cuts to A&E, maternity, children’s and intensive care services at the hospital in south east London.

But campaigners have pledged to continue the fight to stop the cuts.

On the evening of the announcement a crowd of around 500 furious local residents rallied outside the hospital entrance.

They were not reassured by Hunt’s plan to “downgrade” the A&E instead of officially closing it.

“It’s ridiculous,” Shaneen Davies told Socialist Worker. “The NHS is really important, so why are they cutting it? It means more people are going to die.”

Austin Samuel said he had seen his children and grandchildren born in the hospital. “If any of them get ill now, where are they going to go? We have to make them see that enough is enough.”

“If the hospital workers went out on strike I’d support them,” added Michael.

“My Mum lives just up the road. If she has a fall and they’ve closed this place then they are putting her life in danger.”

But the cuts will provide a reduced service at a time when ambulances are already queuing outside hospitals across Britain to bring in emergency patients.

One student nurse who works at the hospital told Socialist Worker, “If it wasn’t for our protests, we wouldn’t have an A&E. It shows that protests have been effective.

“Hunt clearly couldn’t ignore the fact that thousands of people have marched to show opposition to the cuts.

“But the Tories have only said that they won’t fully close the A&E at the moment. It could still close in the future.

“And they’re still making other cuts. We can’t trust the Tories with our NHS—we have to continue to fight to stop all the cuts.”

The cuts were recommended by Matthew Kershaw, the administrator for South London Healthcare NHS Trust. The trust has debts because of PFI schemes.

Lewisham Hospital isn’t part of the trust—but the Tories want to slash services there anyway. Hunt told the House of Commons, “I respect and recognise the sense of unfairness that people feel”.

Yet he claimed that the cuts would be “in the interests of the people of Lewisham”.

Over 25,000 people marched in Lewisham against the plans two weeks ago.

And GPs, MPs and others handed in petitions with more than 50,000 signatures against the cuts to the Department of Health on Wednesday of last week.

Since Hunt’s announcement seven GPs on the board of Lewisham local Clinical Commissioning Group are “considering their position” because their opposition to the proposals was ignored.

The group represents 170 doctors in the area.

To read more about the campaign go to savelewishamhospital.com 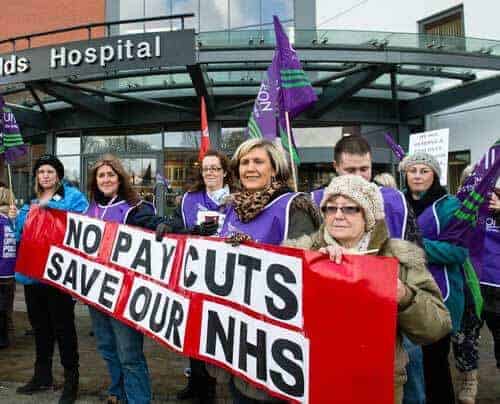 ‘This is a sensitive job, and we’re here to help people’