The EDL wanted to go on a rampage against the Muslim population in the town where the racist organisation was born in 2009. Its leaders claimed that up to 8,000 would march with them—but only 2,500 turned out.

Two anti-racist protests—one of 2,000 in the town centre and the other of 3,000 in Bury Park, where the majority of Luton’s Muslims live—outnumbered the EDL on the day.

The EDL’s plan was frustrated from early. At 9.30am over 200 activists occupied the exit from Luton train station, preventing EDL supporters from exiting. They chanted, “Cancel all services, scum on the line.”

Police used force to remove protesters over an hour later.

People then marched to the Unite Against Fascism (UAF) protest in Park Square where students, trade unionists and black, white and Asian people rallied throughout the day.

A cheer went up when Sikhs joined the protest. Varinder Singh, a member of the Sikhs Against the EDL group, told Socialist Worker, “We are here in solidarity with our Muslim brothers and sisters.”

People came from around the country to show solidarity. Many were disgusted that David Cameron made a speech attacking multiculturalism on the day that the EDL was marching.

Molly Gorman, a teaching assistant from Tower Hamlets in east London, told Socialist Worker, “We have to oppose these right wing hate movements, as we’ve know where they led to in the past.”

In Bury Park, thousands of local Asian people joined with black and white residents, and others, in a show of united resistance (see below).

Activists from Park Square fought hard to join them, breaking past police lines twice before being forced back.

Student Alex Claxton-Mayer travelled to Luton with other school students from Leeds. She and her friends had taken part in the school walk-outs at the end of last year against the government’s attacks on education.

Alex said, “The EDL is blaming everything on other people. We need to fight to stop it.”

EDL members fought among themselves. Its leader Stephen Yaxley-Lennon had to be escorted away by police after an EDL member punched him.

Geoff Webb, a PCS union activist involved in Luton Love Music Hate Racism, told Socialist Worker, “This whole thing has been wrongly handled by the police and the council. They gave the main square to the EDL.

“The EDL wants people to be intimidated, cowering at home. That’s not the kind of world I want to live in.”

The protests opposed to the EDL, which UAF and others fought hard for, showed that anti-racists are in the majority,

But the EDL is not going away—it has called a protest in Birmingham in March.

The large turnout of local people in Luton shows the best way to defeat the racists.

People should build UAF groups in local areas so that when the EDL next marches it is met by a force that can drive it back. 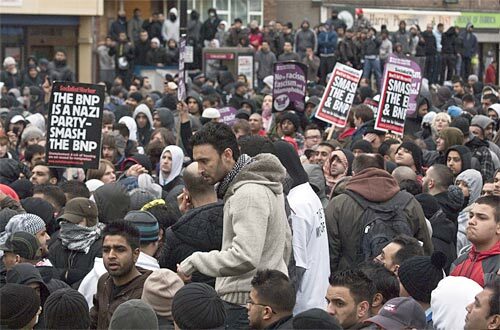 People of Bury Park united to resist any attacks