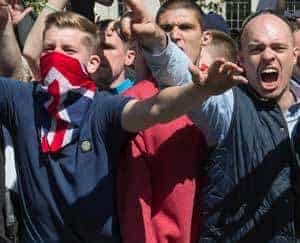 The racist English Defence League held their biggest protests since 2011 in the wake of the Woolwich killing.

And around 1,000 gathered at Downing Street in central London on Monday of this week.

Anti-racists mobilised against them both times.

Over 1,000 trade unionists, socialists, Muslims, councillors and anti-racists marched through Newcastle to oppose the racists.

In London, hundreds gathered to hand in an anti-racist statement initiated by Unite Against Fascism (UAF) and to oppose the EDL.

Speakers from the Muslim Council of Britain, CND and the Stop the War Coalition addressed a rally. Labour MP Jeremy Corbyn and trade unionists also spoke.

“Woolwich was unacceptable, but to blame Islam and attack mosques is as bad as what happened to Jewish people in the 1920s and 1930s,” said Corbyn.

Shabbir Kawsar from the MCB said, “We are grateful for the solidarity of UAF”.

Silencing debate in the National Union of Students