‘Proud we went all out and won’

‘Proud we went all out and won’

VICTORIOUS STRIKERS at Team Valley Brush in Gateshead went back to work on Monday demonstrating how they had won-by sticking together in solidarity. After four weeks on all-out strike pickets assembled to march back into the factory together in a magnificent show of strength. “We stuck together,” says striker Ann Hardie, “and we just got stronger and stronger!” “We’re over the moon,” says Karen Sharkey. “It’s taken us four weeks but we got there, and we go back in with our heads high. We stood here through sun, rain, snow and wind, but everybody stuck together and that’s why we won.”

The dispute began after workers were offered an insulting pay rise of 1 percent on their already miserable 3.08 an hour. Company chairman Peter Wheeldon had refused to pay the minimum wage for the basic hourly rate, using a “loophole” in New Labour’s weak legislation that allows the minimum 3.70 an hour to be made up with bonuses and overtime payments.

Wheeldon threatened to close the factory if workers went on strike. “We’ve proved him wrong,” says Barbara Patterson. “He only had the chiefs in there, but you can’t run a factory without the indians.” Workers go back proud to have won the minimum wage as their basic hourly rate. They have also won enhanced overtime payments, an attendance allowance and new bonus rates-all based on the improved hourly basic.

“It’s a good victory,” says shop steward June Patterson. “But we’ve got to get the standards higher. He didn’t think we’d stay out, but by last week he was a broken man.” The strikers raised their demands during the course of the strike and now want to be paid rates better than the minimum. The next pay review is due in July.

“We’ve got the peanuts up to coconuts,” says Hazel Bell defiantly. “We’ve got stronger by fighting for our rights, but if we don’t get something decent next time he knows we’ll be back out. We’re looking forward to better times.” Barbara Patterson from the strike committee also thanked the Socialist Alliance and UNISON for their assistance in the Strike Support Group which organised solidarity and financial support. “We couldn’t have done it without your help,” she said. In the three days after the support group was launched last week collections brought in over 1,000, with donations from UNISON, MSF and GMB union branches, Gateshead Trades Council, Tyneside Socialist Alliance, ex Spartan Redheugh ISTC steel workers and bucket collections.

Strikers recognise it was the strength of their action, and the pressure that the solidarity brought, that won them victory. “Our officials wanted us to take one-day strikes, but that wouldn’t have affected Wheeldon,” says one. “They have been too slow and advised us to do too little. All-out action won this dispute.”

The strikers know that there are other companies in the region that abuse the minimum wage legislation, but they hope that other workers follow their example. Perhaps the slogan “The workers united will never be defeated” does not seem so old fashioned any more and needs to be revived by our union leaders. 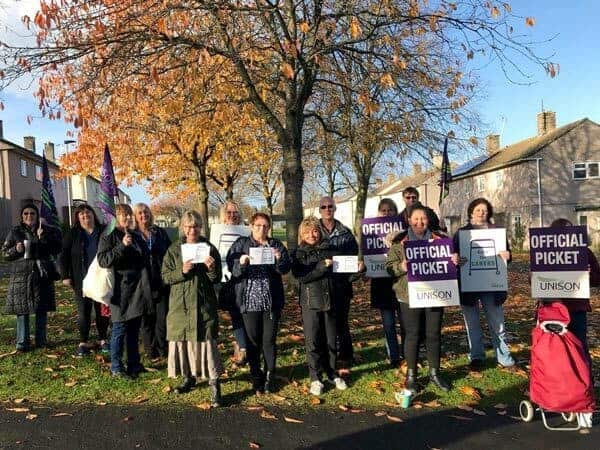 Carers reject extra hours or a cut in pay