The tactical adviser to the police operation that resulted in Anthony Grainger’s fatal shooting said it was not his role to “check the accuracy of the intelligence”.

Inspector Andrew Fitton was giving evidence at the public inquiry into Anthony’s death.

He was questioned on the gas canister used in the operation, since there was no record of the risks involved.

Fitton said, “I was told that they had been involved in violence and armed robbery” when referencing previous conviction information on Anthony and David Totton.

He told the inquiry that it was not the role of a tactical advisor to “check the accuracy and reliability of the intelligence” that was given.

Nor did the tactical planner, known as X7, have “any role or responsibility for checking the accuracy and reliability”.

Solicitor for Anthony’s family Leslie Thomas QC questioned Fitton on the use of the CS gas canister during the operation.

He asked Mr Fitton whether it would be very difficult to comply with warnings by armed firearms officers “if you are coughing, spluttering and having difficulty breathing.”

There was no recording made Fitton of the risks of using a gas canister or weighing these risks in relation to this specific case.

Thomas asked whether the use of the gas canister raised the risk “that individuals might have involuntary movements, coughing, spluttering?”

Fitton agreed and said “I should have recorded it” and weighed the risks of using CS gas.

Steven Heywood was strategic firearms commander at the time and gave firearms authority for the operation – he was called as a witness last week.

Heywood’s threat assessment record said there were “previous for violence and armed robberies.” But it has been established that Anthony had no convictions of this type.

Heywood said “I had significant intelligence….that he has been responsible for armed robberies.”

He conceded that this information was “not convictions.”

Heywood also claimed that the operation was not “brought to a head” due to concerns of the use of resources.

The counsel for the inquiry Jason Beer QC said an organisational review of Operation Shire, requested by Heywood in January 2012, suggested a concern about the “expenditure of precious resources”.

Mr Heywood responded, “We have had operations in the past that have run longer.”

Jessica Brown was called as a witness for the inquiry. She and her friends were nearby when Anthony was shot..

She said that after hearing the first “bang” she and her friends were ushered into a restaurant by a couple. They went to the back room for safety.

She told the inquiry that from a small window she saw a man lying on the floor by the driver seat of a car.

She said that over the course of five minutes he did not move and that she did not see anyone approach him, saw no police officers or police cars.

Thomas asked Brown “At any point during the bangs, did you hear anybody shout or identify themselves or give a warning that they were police”.

Jessica replied “no, I did not.”

Anti-war single aims for the top 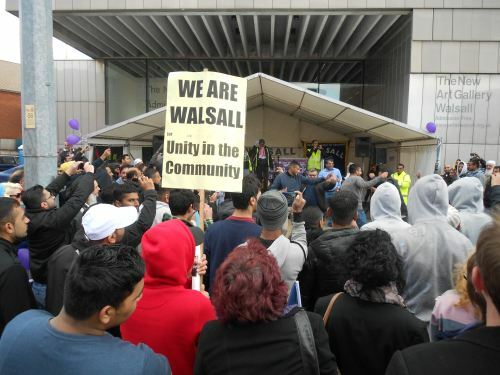 EDL outnumbered and frustrated by anti-racists in Walsall