“I’M PROUD to be selected to fight in St Helens for public need, not private greed.” So says Neil Thompson, a firefighter standing for the Socialist Alliance in the seat where New Labour has parachuted in Shaun Woodward, a millionaire ex-Tory with three servants.

The Socialist Alliance and Scottish Socialist Party are standing over 160 candidates at the general election. They are campaigners, trade unionists and ordinary workers who have pledged to take the average worker’s wage if elected. They are fighting against the madness of handing over swathes of the NHS to fat cats.

“New Labour’s so called modernisation means more privatisation across health, education and other public services,” says Neil. Neil Thompson is the son of a miner. His dad died about ten years ago of a lung disease caused by coal dust. New Labour’s Shaun Woodward supported the Tories’ war against the miners in the 1980s and the destruction of mining towns in the 1990s. This is the choice. Back your nearest socialist candidate.

EDL members sent to prison for attack on socialist meeting 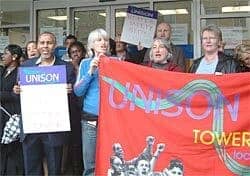