This article is over 16 years, 5 months old
The anger expressed by Muslims over the caricatures of the prophet Mohammed is rooted in the growth in Islamophobia since 9/11. That was the overriding message of Muslims interviewed by Socialist Worker.
By Joseph Choonara
Downloading PDF. Please wait...
Saturday 11 February 2006

The anger expressed by Muslims over the caricatures of the prophet Mohammed is rooted in the growth in Islamophobia since 9/11. That was the overriding message of Muslims interviewed by Socialist Worker.

Anas Altikriti is a spokesperson for the Muslim Association of Britain, which has co-sponsored the Stop the War Coalition demonstrations against wars in Iraq and Afghanistan.

“These cartoons reinforce myths that Muslims have been trying hard to dispel. Today, if you ask a five year old child to draw a picture of a terrorist, they would more likely than not draw someone with a beard and turban – someone who looked like a Muslim or an Asian.”

The media frenzy endangers the solidarity many Muslims have built up with other groups since 9/11, Anas added:

“We yearn to stand together, but many Muslims no longer know where to stand. They feel they are being targeted by the police, the media, and by foreign and domestic policy.”

Muhammad Ali, founder of the Islam Channel, expressed similar concerns. “This is not an isolated incident, there is a context – there is a worldwide ‘war on terror’,” he said.

In singling out Muslims for attack, the papers that published and republished the cartoons were joining a much broader racist onslaught.

Yvonne Ridley is a leading member of Respect and a convert to Islam. She said, “There have been continued attacks on Muslims in Britain. These include 3,000 police raids since 9/11. Stop and search of Muslims has rocketed since the 7 July terror attacks on London. I’m sick of people thinking that Muslims are an easy target.”

All those Socialist Worker spoke to were clear that free speech could not be held up as an abstract right. “With free speech comes a responsibility,” said Anas. “Your freedom stops where other people’s freedom begins.”

He added that the central problem was not the depiction of the prophet Mohammed, on which Muslim opinion is “not unanimous”.

“Most Muslim civilisations don’t have depictions of the prophet himself, but some groups, for example in parts of Lebanon and Iraq do. The central problem is that these cartoons depicted the prophet inviting people to terrorism and suicide bombing.”

Muhammad Ali argued that the cartoons echoed with earlier hate campaigns. “They used to draw cartoons of Jews in Germany. Later they started killing them in the Holocaust.”

A Sivanandan, director of the Institute of Race Relations and a longstanding anti-racist campaigner, draws similar parallels.

“It’s back to the old ‘sus laws’,” he said. “Every black kid was suspected of committing a crime. That’s what the anti-terrorist laws do now.

John Rees, national secretary of Respect, attacked the double standards at work in the media’s reaction to the cartoons row:

“If this were a cartoon of the Reverend Jesse Jackson as a golliwog, or of a hooked nose Jew counting money, the liberal press would be rightly full of angry editorials denouncing the racism of such images.”

Michael Lavallette, a Respect councillor in Preston, Lancashire, is among those who have responded by showing solidarity with Muslims.

“People started phoning me on Friday of last week to ask what Respect was doing over this issue,” he said. “We called a meeting involving a Respect speaker and trade unionists, as well as Christians and Muslims.

“Muslims feel they are being demonised. The cartoons feed into an atmosphere of hatred and Islamophobia.” 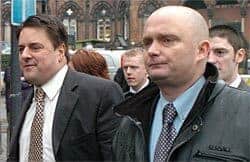